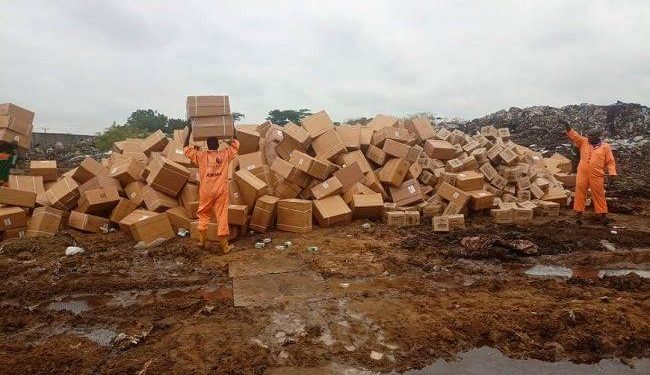 The Nigeria Customs Service, led other government agencies including the National Agency for Food and Drug Administration and Control, the National Drug Law Enforcement Agency, and the Department of State Services to destroy 48 containers of seized and condemned pharmaceutical products at the Lagos Waste Management Authority’s waste destruction site in Epe, Lagos State.

The Assistant Controller General of Customs in charge of Enforcement, Inspection and Investigation, Usman Dankingari; Customs Area Controller, Apapa Ccommand, Comptroller Yusuf Malanta Ibrahim, and the National Public Relations Officer of the Customs, Timi Bomodi, were at the event on Thursday.

Addressing journalists at the destruction site, Dankingari said that unregulated drugs like the ones being destroyed are fuelling banditry, kidnapping and insecurity in the country.

He said, “This type of drugs fuel banditry, armed robbery, terrorism and insecurity in the country. That is why the Federal Government, through the Customs and NAFDAC, regularly mop up these drugs from circulation. It is on the basis of this that the Comptroller General of Customs, Col Hammed Ali (Rtd) mandated us to come and destroy these illicit drugs in collaboration with other government agencies. For today, we are destroying eight containers of these drugs. In total, we have 48 containers of drugs that will be destroyed in the coming days.

“These drugs came into the country as import units but were seized after examination revealed that they are substandard and fake. These are drugs that don’t have expiry or manufacturing date on them. These drugs didn’t pass through NAFDAC regulation and have everything written on them in foreign languages that Nigerians won’t be able to read.”

Arts and Creativity: The evolution of Cane Craft in Nigeria