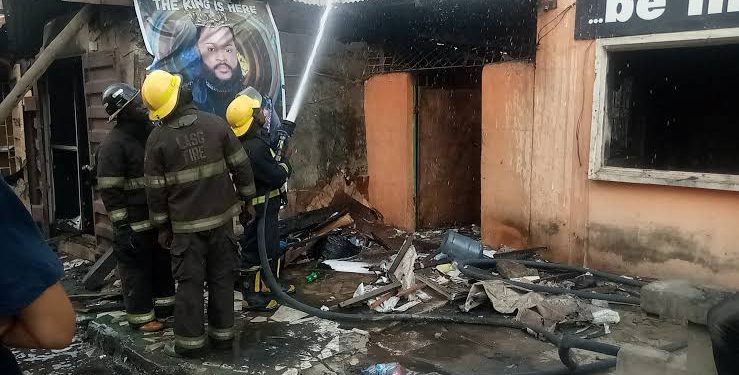 A printing press at Pearse Street in Tejuosho market, Yaba area of Lagos State was on Sunday razed.

Although no life was lost, properties and valuables, including machines worth millions were destroyed.

The Lagos State Fire Service, Ilupeju branch, and other emergency responders were on ground to put out the fire.

An official of the fire service, said: “We received a distress call that there was a fire outbreak. We got there within a twinkle of an eye, On getting there, we made an aggressive attack.

“We were able to curtail the fire so we prevented the fire from moving further. Everything is under control, there is no cause for alarm but what caused the fire is under investigation and has not yet been known.”

The co-owner of the press, Mr Philip Ahatty, said: “I just came back from church and have not even had anything to eat.

“I was relaxing before I got a call that the shop is on fire and they didn’t even know the source.

“There was no power supply at the time. At that time one of our staff just closed the betting shop and had gone home.

“A girl was passing the shop when she saw little smoke and raised the alarm. The smoking was coming out in front of the shop.

“According to the girl, she said they restored power five minutes after the smoke was noticed.

“Though the fire service came on time, almost all was lost. We had a printing machine, cutting machine and joining machine including an air conditioner each machine cost approximately N2.5m. I and my friend own the printing shop.”