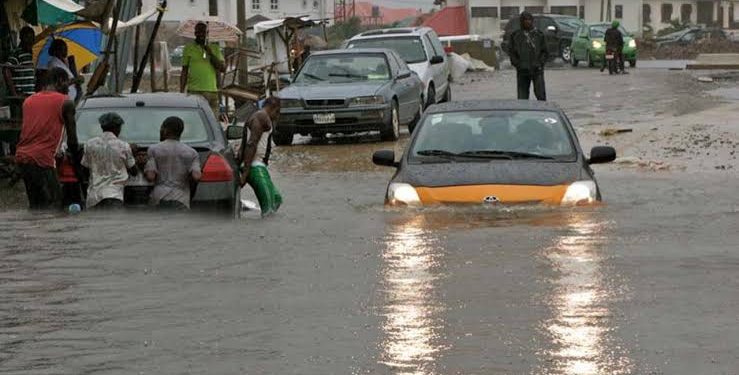 Residents and commuters around the Oko Oba, Ekoro, Akowonjo, and Egbeda areas of Lagos State, were on Sunday grounded for hours after floods took over the communities.

It was gathered that the floods, which resulted from a downpour around 1:20pm on Sunday, led to gridlock in the communities.

Our correspondent learnt that the floods stopped residents from going about their daily activities as many stayed indoors.

It was gathered that over 25 vehicles were damaged by the floods.

The South-West Coordinator of the National Emergency Management Agency, Ibrahim Farinloye, who confirmed the incident, said the power distribution firm in charge of the areas was notified to put off power supply.

Farinloye noted that the communities were flooded as a result of a clogged canal.

He said, “Motorists and residents of Ekoro junctions, Ajisebiara-Mecca, Akowonjo and Egbeda are being advised to exercise utmost caution in their areas as a result of electricity poles that fell on the ground, though the Disco has been contacted to isolate the areas to avoid electrocution.

“Motorists are advised to exercise utmost caution as the traffic gridlock is terrible due to every motorist trying to access the junction at the same time. Upon assessment, about 25 vehicles were found to have their engines affected by the flood and the owners have been advised to avoid driving the vehicles. As of now, no report of life was involved.”