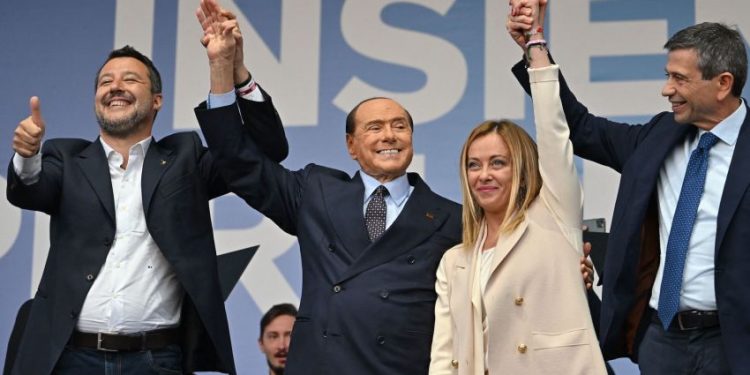 Giorgia Meloni, the hard-right leader who was sworn in as Italy’s first female prime minister on Saturday, won the election on a campaign built around a promise to block migrant ships and support for traditional “family values” and anti-LGBTQ themes.

Meloni was sworn in by the Italian President Sergio Mattarella in a ceremony taking at the Quirinale Palace in Rome.

She heads an alliance of far-right and center-right parties, her own Brothers of Italy chief among them, and is set to form the most right-wing government Italy has seen in decades.

Meloni’s win in parliamentary elections last month suggests the allure of nationalism remains undimmed in Italy – but her vow to take the country on a hard-right turn still leaves many uncertain what will happen next.

The new government is made up of a coalition with two other right-wing leaders. One is Matteo Salvini, a former interior minister who became the darling of the hard-right in 2018 when he shifted his party, the League, once a northern secessionist party, into a nationalist force.

Meloni’s 24 ministers – six of them women – were being sworn in alongside her on Saturday.

The other is Silvio Berlusconi, the center-right former Italian prime minister widely remembered for his “bunga bunga” sex scandals with young women. Both men have previously publicly expressed admiration for Russian President Vladimir Putin, which has prompted questions over what the coalition’s approach to Russia will be.

And just this week – days before consultations on forming the government were set to begin – secretly recorded audio was circulated in which Berlusconi appeared to lay the blame for Putin’s invasion of Ukraine at Kyiv’s door, and boasted of having reestablished relations with the Russian leader.

“I reconnected a little bit with President Putin, quite a bit, in the sense that for my birthday he gave me 20 bottles of Vodka and a very sweet letter, and I responded with giving him bottles of Lambrusco,” said Berlusconi in the clip, released by Italian news agency LaPresse on Tuesday. The 86-year-old billionaire and media magnate was speaking with Forza Italia party members at the time.

A party spokesperson denied Berlusconi was in touch with Putin, saying he had been telling parliamentarians “an old story referring to an episode many years ago.” Berlusconi defended his comments in an interview with Italian newspaper Corriere della Sera on Thursday, saying they had been taken out of context.

Amid backlash over the comments, Meloni, who has been a strong supporter of Ukraine as it battles Moscow’s invasion, sought to clarify where she and and the coalition would stand once in power.

“I have and always will be clear, I intend to lead a government with a foreign policy that is clear and unequivocal. Italy is fully part of Europe and the Atlantic Alliance. Anyone who does not agree with this cornerstone will not be able to be part of the government, at the cost of not being a government. With us governing, Italy will never be the weak link of the West,” she said.

Nonetheless, liberals within Italy and the European Union are fearful of what the promised rightward turn may mean for the country and its future – while conservative constituents feel only a strong-arm politician, like Meloni, can lead the country out of crisis amid soaring energy costs and high youth unemployment.

“Meloni is not expressing the vote choices of radical right-wing voters, because we have data that shows that she has been voted for by mostly the center-right,” political science professor Lorenzo De Sio of the Luiss Guido Carli University told CNN.

“I would say that the motto for Meloni is to be a sort of new conservative – that is to say, conservativism for the 21st century. She might bear some far-back connection to the post-fascist legacy, but clearly that’s not the core of her political platform now.”

Meloni grew up in the working-class Roman neighborhood of Garbatella, a historically left-wing part of southern Rome that was built during Benito Mussolini’s fascist dictatorship. She got her political start in the movement Youth Front, a political organization with fascist roots.

She went on to create her own political party, Brothers of Italy, which in just four years went from taking 4% of the vote to winning 26% in last month’s election. While that doesn’t represent the majority of Italians, thanks to her partnership with Berlusconi’s Forza Italia and Salvini’s League, the coalition has enough seats in parliament to govern the country.

Back in the Garbatella neighborhood, among the fruit and vegetable stands that Meloni would go to with her mother, some locals remember her as a child, long before she embraced politics. Opinions on what she will be like as a leader vary widely.

“I know her very well. I knew her since she was little,” said Aldo, a fruit and vegetable vendor from Garbatella who has run his market stand for decades. “Her mother would come shop here. She always had a book in her hand to study. If she goes forward like she did when she was little, she’ll be strong.”

He added: “You have to have a strong fist. Period. You understand? That’s how you move forward. Otherwise Italy, kapoof, it goes away!”

Just across the market, Gloria, who was born and raised in Garbatella and helps her son at his Roman food stand, has very different views.

“What she has said until now terrifies me,” she told CNN.

“There are many people that connect with these kinds of conservative ideals because they are racist, because they are not progressive. I have three children and I wonder, will my daughter have the freedom to have an abortion if she wants, to be a lesbian?”

Meloni has sought in recent times to distance her party from its neo-fascist roots. Her policy proposals have also evolved over time, including walking back some of her more anti-EU ideas.

Back in 2014, she said, “Italy has to leave the euro!” and called for Congress to revoke sanctions on Russia. Now, according to her proposed plan for government and latest comments, she wants Italy to be a “protagonist within Europe.”

Emiliano, a local who was shopping at the Garbatella market, said he didn’t bother to vote in the latest election. “Neither the left nor the right deserve a vote. Before, politicians ate but we ate also. Now only they eat,” he said.

With the skyrocketing cost of energy, the risk for Italian businesses and households is high. The agricultural sector, which represents 1.96% of Italy’s GDP, is facing a shortage of everything from fertilizers, to diesel, to electricity and glass, causing prices to rise rapidly with a devastating impact on farm budgets, according to Coldiretti, the largest association for agricultural assistance in Italy.

According to a recent report by Coldiretti, rising production costs have forced many small agricultural businesses to shut down for the season because they can’t cope.

Sabina Petrucci manages her family’s olive oil company, Olio Petrucci, and is also a member of Coldiretti’s European council for young agricultural workers. She feels hopeful and believes the only way to fix the present issues is through strong political leadership.

“We need a very concrete government who helps us with energy costs and also to achieve the financial aid and financial help we may need in the future,” said Petrucci. “Many of the producers in the area are stopping their production, they really are frightened about the increasing costs.”

She describes rising energy costs as “the major threat for us,” adding: “We have opened our mill, but the production costs have risen throughout the summer.”

Italy has the third oldest population in the world, but Meloni and her party have been working to connect with Italy’s youth, the next generation of voters. She herself became involved in politics at 15, after registering with Youth Front, the youth wing of the Italian Social Movement (MSI), a party established by Giorgio Almirante, who was a minister in the fascist dictator Benito Mussolini’s government.

Francesco Todde is a leader of the National Youth movement, a political movement put in place by Meloni’s Brothers of Italy party in 2014 to connect with a younger generation of politically interested Italians who have been frustrated with the political status quo.

“Giorgia Meloni comes from a political youth path, so she always paid a lot of attention to the youth and made reforms for the youth. At the start of her political career she was minister of youth,” he told CNN.

Elisa Segnini Bocchia, another committed member of the National Youth movement, responds to why some are quick to associate this movement with fascism, saying: “Our past isn’t our future. So, we don’t look at the past. We look for the new future.”