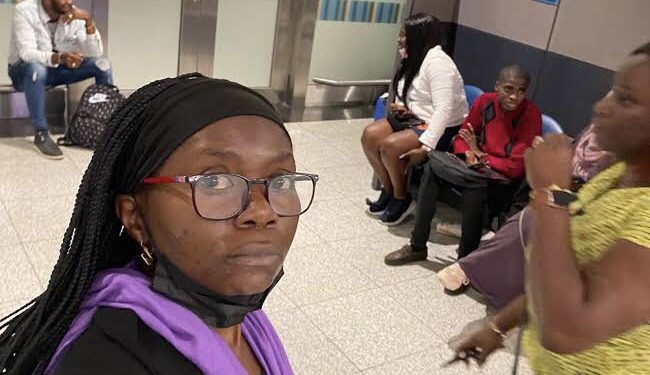 The family of Dinchi Lar, a Nigerian lady who was jailed for one year in the United Arab Emirates, have said she was incarcerated for exposing the maltreatment of Nigerians at Dubai airports.

They stated this during a protest on Sunday in Abuja after the Dubai authorities sentenced her to one-year imprisonment.

On August 31, Lar had taken to her Twitter page to share photos and videos of herself and other people she identified as Nigerians being detained at the Dubai international airport.

She wrote, “I am at the Dubai international airport and myself and some tiger Nigerians with valid visas are being held in a room hours after arriving with no explanation and no information on what we can do. Please help me. There is more than 20 of us.”

In a series of posts that followed, Lar accused the airport authorities of humiliating Nigerians.

On Saturday, her family, in a post by one @jerrydoubles, said she was sentenced for exposing the maltreatments of Nigerians in Dubai.

The post read in part, “It is sad and regrettably heartrending to tell you all that Dinchi Lar was sentenced on 12th Oct 22, to 1yr in jail in Dubai. Her family is devastated and Nigeria didn’t save her. Her sentence came from the backdrop that she got a family visa to travel. But in fact, she was traveling with her sister. It got messy and complicated. She was released on arrival after being detained for several hours, only to be sentenced when she was returning to Nigeria.

“They are capitalising on the fact that she made a video then posted it on her Twitter timeline to narrate the ordeal. They said it’s cybercrime in their country. She went ahead to delete it. Still, that didn’t soften them. Now she’s jailed. We are planning a protest at the Dubai consulate in Abuja.”

PUNCH Metro gathered that some family members and friends protested on Sunday against her sentencing, stating that she was “detained in Dubai since September 6.”

The Nigerians in Diaspora Commission, in a release by its Head of Media, Public Relations and Protocols Unit, Abdur-Rahman Balogun, said Lar was convicted under the UAE cybercrime law.

The release read in part, “Under the UAE cybercrime law, taking a video or photograph of someone without his/her consent and posting such on social media is an offence punishable with one-year jail term or a fine between approximately $69,000 and $137,000, or both jail term and fine.

“Ms Lar made and tweeted the viral video of the UAE official at the airport. She was sentenced on the 12th of October and has 15 days to appeal the judgment. Ms Dunchi Lar can still appeal the ruling and has been assured of moral and consular support by the Nigerian mission in Dubai.”

BREAKING: Universities To Shut Down Temporarily For 2023 Elections, Says NUC

The regulatory agency for universities in Nigeria, the National Universities Commission (NUC) has ordered the closure of universities across the...