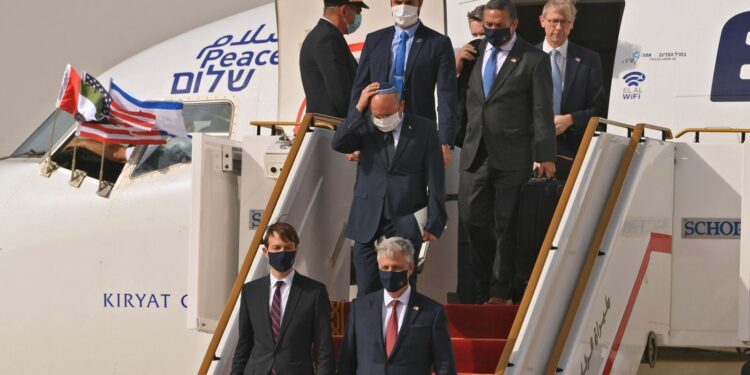 Jared Kushner (centre, left) and US national security adviser Robert O'Brien (centre, right) get off the flight after landing

The flight marks the latest stage in the normalisation of diplomatic ties between the Jewish state and a key Gulf Arab nation.

An Israeli passenger plane with anti-missile technology and “peace” painted on its fuselage has made geopolitical and aviation history, flying from Israel to the United Arab Emirates (UAE).

LY971 took off from Ben Gurion International Airport in Israel bound for Abu Dhabi at just after 11am on Monday, marking the latest stage in the normalisation of diplomatic relations between the Jewish state and a key Gulf Arab nation.Sponsored link

A delegation of Israeli government officials were joined on board the El Al flight by an American delegation led by Donald Trump‘s son-in-law and adviser Jared Kushner.

Mr Trump’s administration has claimed credit for brokering the deal in which the UAE has become the first Gulf Arab country to recognise Israel.

Speaking before the flight took off, Mr Kushner said: “Well, this is a historic flight, we hope that this will start an even more historic journey for the Middle East and beyond…”

He continued: “I prayed yesterday at [Jerusalem’s Western] wall that Muslims and Arabs from throughout the world will be watching this flight, recognising that we are all children of God and that the future does not have to be pre-determined by the past.”

“This is a very hopeful time and I believe that so much peace and prosperity is possible in this region and throughout the world,” Mr Kushner said.

The flight passed through the airspace of Saudi Arabia and over its capital Riyadh, marking another historic moment.

The Saudi government does not have diplomatic ties with Israel but did grant the plane it overfly rights.

The normalisation deal, in which the UAE and Israel will open embassies and establish commercial, defence and tourism ties, was made public in a surprise announcement earlier this month.

It is being framed by the Americans and the Israelis as a “pathway to peace” in the region and has received cautious support from around the world, including from the British government.

At the weekend, the UAE government repealed a law, in place since 1972, which boycotted Israel. A direct phone service between the two nations has also been established.

However, the Palestinians who represent the central component of any quest for regional stability and peace have been left out of the process.

Senior officials from the Palestinian Authority have described the deal as a betrayal by an Arab nation because the UAE broke with a long-standing convention that recognition of Israel would only come in return for the formation of a Palestinian state.

Speaking at a meeting of the Palestinian Authority, Palestinian Prime Minister Mohammed Shtayyeh said: “It has hurt us very much to see an Israeli plane landing today in the Emirates in clear and blatant violation of the Arab position regarding the Arab-Israeli conflict.”

Reflecting the fact that no other Arab countries have yet followed the UAE in its decision, he said: “We salute the clear Arab position that reject free normalisation with Israel… despite the pressure exerted on some Arab countries by the Americans.”

The normalisation deal materialised after Israeli Prime Minister Benjamin Netanyahu agreed to shelve plans to annex parts of the Palestinian territories which it illegally occupies in the West Bank.

There are two broader geopolitical contexts to the deal.

Israel and the UAE share a common enemy in Iran. The alliance strengthens the American-led axis against the malign influence that they believe Iran poses.

The Palestinians continue to reject all talks with the Israelis and Americans on the basis that the plan proposed by the US president denies them a capital city in east Jerusalem and much of the West Bank land they were promised in the Oslo Accords signed in 1993.

The Trump plan instead creates Palestinian enclaves within a greater Israel.