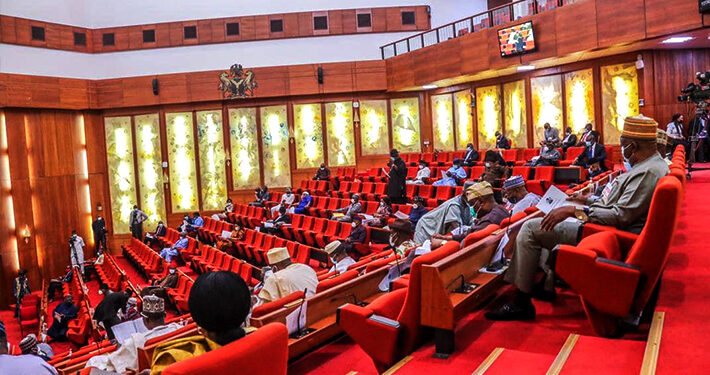 The Nigerian government under President Muhammadu Buhari has found itself on a financial cliff due to the disparity between revenue generation and expenditure caused by dwindling oil revenue. Oil revenue has declined in recent years while expenditure has been growing at a geometric progression, and the government appears to see borrowing as the only means to block the widening fiscal deficit.

“Over time, we have resorted to borrowing to finance our fiscal gaps,” Mr Buhari said in his budget presentation speech last month, before explaining how the government plans to finance the huge deficit in the proposed 2023 budget.

However, federal lawmakers are proposing a drastic measure to help the country out of the fiscal hole by placing eight revenue-generating agencies on financial autonomy. To this end, the National Assembly has moved to stop the agencies from spending their revenue arbitrarily by placing them on “cost of collection” percentage.

These agencies are to join the Federal Inland Revenue Service (FIRS) and the Nigerian Customs Service (NCS) as entities that enjoy the cost of collection percentages. According to the lawmakers, the other 53 revenue agencies will, with time, be similarly treated to improve revenue collection.

This means that the agencies listed above will not be able to use their discretion to spend their revenue for operation and remit 80 per cent of the operating surplus as currently practised. Instead, they will be given a fixed percentage of their revenue as the cost of collection.

The decision by the lawmakers came off the heels of the exposé that came out of the public hearing on the MTEF in August, where several agencies were indicted for spending their operating surplus, in breach of the provisions of the Fiscal Responsibility Act.

In some instances, operating costs are overblown with items like furniture, computer equipment, operational vehicles and others. In some instances, fully funded agencies that ought to remit 100 per cent still spend their internally generated revenue.

Section 22 of the FRA provides that partially funded agencies must remit 80 per cent of their operating surplus to the consolidated revenue fund, while the other one-fifth shall be transferred to its general reserve fund.

“Notwithstanding the provisions of any written law governing the corporation, each corporation shall establish a general reserve fund and shall allocate thereto at the end of each financial year, one-fifth of its operating surplus for the year

“The balance of the operating surplus shall be paid to the Consolidated Revenue Fund of the Federal Government not later than one month following the statutory deadline for publishing each corporation’s accounts,” section 22 reads.

To the chagrin of the lawmakers in the finance committees, several fully-funded agencies spent the entirety of the operating surplus. In one instance, the Chairman of the Committee, James Faleke (APC, Lagos) called for the sack of the Director of Finance of the Federal Competition and Consumer Protection Commission (FCCPC), Akinyoghan Ojo, over the spending of operating surplus.

In defence, Mr Ojo claimed that the spending of Internally Generated Revenue was approved by the House and Senate committees.

“We presented our internally generated revenue (IGR) budget to our committee and it was approved by the committee. The money was allocated for us from the treasury and we have not spent it,” Mr Ojo had claimed.

This was not an isolated case, as several agencies received queries on the spending of their operating surplus. Their justification was that the National Assembly committees gave them the nod. This appears to be inconsistent with section 80(2) of the 1999 Constitution which provides that no money shall be spent unless approved by the National Assembly through the appropriation act.

Mr Buhari had in his budget speech also warned the legislative committees to refrain from approving budgets of GOEs, as he lamented the decline in government revenue.

“It has however come to my attention that Government-Owned Enterprises liaise directly with relevant NASS committees to have their budget passed and issued to them directly.

“I would like to implore the leadership of the National Assembly to ensure that the budget I lay here today, which includes those of the GOEs, be returned to the Presidency when passed. The current practice where some committees of the National Assembly purport to pass budgets for GOEs, which are at variance with the budgets sanctioned by me, and communicate such directly to the MDAs is against the rules and needs to stop,” Mr Buhari said in October.

In addition, the lack of financial prudence by the agencies is a violation of the 2018 circular SGF.50/S.3/C.9/24 issued by the Secretary to the Government of the Federation, Boss Mustapha. The circular directed that GOEs’ capital budget shall be embellished in the main budget. It also puts a limit on spending.

“Limit of allowable expenses, frequency of Board meetings, overseas travels and other potentially wasteful practices shall be strictly enforced; and ii. Annual GOE capital budgets shall be mainstreamed into the Federal Government’s Capital Budgets in order to ensure that they are subjected to the same level of scrutiny, procurement and monitoring processes,” the circular reads in part.

One other striking revelation that emerged from the hearing was the inability of the Office of Accountant-General to track inflow into the government coffers because the agency is still heavily dependent on papers instead of computers.

During the hearings, there were several embarrassing moments that exposed the inability of the agency to monitor inflow. On one occasion, the Nigerian Energy Commission claimed to have remitted N13 million. However, a representative of OAGF stated that the commission remitted N27 million.

Also, the National Oil Spill Detection and Response Agency appeared before the committee and claimed to have remitted N1.9 billion. Again, the OAGF said the agency remitted N2 million, only for the Director-General of NOSDRA, Idris Musa, to produce the receipt issued by the Office of the Accountant General which showed that NOSDRA indeed remitted N1.9 billion.

In another instance, the Federal Road Safety Corps claimed to have remitted N1.5 billion to the government purse. Although the figure was confirmed by the Fiscal Responsibility Commission, when the Chairman of the Committee, Mr Faleke, asked Muhammed Saleh, director of federation account of the OAGF, to also confirm the figure, he claimed FRSC remitted only N27 million.

Mr Faleke said the FRSC record was more updated than the OAGF because the latter is still using an analogue system.

“Are you still using analogue in your office?” Mr Faleke asked.

To address that, the House, in the approved MTEF, resolved that there should be a common electronic platform for reconciliations amongst the government MDAs, OAGF and Fiscal Responsibility Commission for effective monitoring and remittances.

How will the cost of collection work?

The MTEF did not specify the percentage to be given to those agencies and there is a concern about whether some of the agencies generate enough for a certain percentage to cover their operations, capital and personnel cost.

For instance, Nigerian customs has a revenue target of N3.01 trillion for 2022. Out of the target, it is expected to get N151.84 billion as cost of collection, in addition to 60 per cent of Comprehensive Import Supervision Scheme (CISS) which is N60 billion, two per cent of VAT share of NCS which is N14.94 billion, retained income of N114.9 billion and share of the excess target (2021), which is N27.85 billion.

While most revenue-generating agencies don’t have as many personnel and large operational scope as the customs, most do not generate as much as the agency and the Federal Inland Revenue Service (FIRS).

JAMB has consistently stated its willingness to be self-funded. However, there are questions about it deviating from its core mandate. Many have argued that it was created not to generate revenue but as an examination body. The same could be said of NAFDAC, an agency with the responsibility of regulating food and drugs. There are concerns that these agencies may jettison their responsibilities and focus on revenue drive instead.

“We cannot throw all the agencies into this kind of arrangement because if you throw all of them, particularly those who are regulatory agencies, they may turn around and be posing high fees on the entities they are regulating. We have to identify those generating enough to cover their operating expenses,” Muda Lawal, a fiscal policy expert, said to PREMIUM TIMES.

Similarly, Eze Onyekpere, another fiscal policy expert, said while the nation needs every single naira it can get, lawmakers should consider the peculiarity of each agency, instead of lumping them all together.

“This should have been done on a corporation-by-corporation basis, looking at what they do, how they make money. For instance, Customs and FIRS, are their percentages fully utilised? Are they bound to spend all of it? Or are they duty-bound to remit the surplus? If you look at FIRS, they own properties everywhere, they are just building, and everybody understands that the kind of money they pay to their staff is a bit on the scandalous side.

“I don’t think that is a good model for these agencies. The only thing is that there should have been sufficient supervision and oversight to see what exactly they make, and when they make that money, they return the appropriate one to the treasury. Saying that they must take a percentage of what they make is on the high side. However, it should be with the condition that it should be the only money they get,” he said.

Nigeria is in a desperate time. Amidst the dwindling revenue from oil, attention is fully on the GOEs and other revenue-generating agencies to provide more. Last month, during a budget defence session, the Minister of Finance, Zainab Ahmed, said the squeeze on the GOEs has increased remittances from an average of N360 billion per annum to N1.3 trillion.

“The fact can be seen from the performance of GOE where we have realized N1.3 trillion. This is the first time we are able to achieve such a target. Three years ago, the average performance was N320 billion,” she said.

What appears to be obvious is that Nigeria is at a desperate time, and the government seems to be willing to deploy desperate monetary and fiscal policies, including the ongoing redesigning of the Naira by the Central Bank of Nigeria.