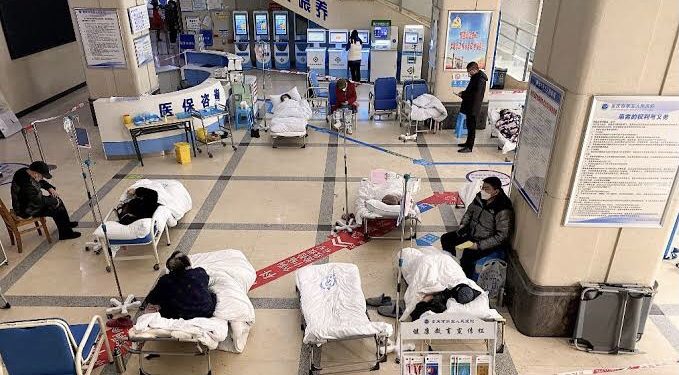 “Deceased, deceased,” a staffer in full protective gear shouted as she handed a nurse a death certificate, their hospital in central China overflowing with Covid patients.

China is battling a wave of infections that have hit the elderly hard but has officially logged only a handful of deaths from the coronavirus after the government redefined the criteria by which Covid deaths are counted.

At No. 5 People’s Hospital in Chongqing, the main entrance lobby had been converted into a makeshift Covid ward when AFP visited on Friday.

In the vast atrium, about a dozen beds occupied by mainly elderly patients on IV drips were cordoned off with red and white tape.

In a nearby room, about 40 mostly elderly and middle-aged patients sat on sofas and lay on beds receiving IV drips, some coughing.

A nurse said they all had Covid.

In an intensive care unit next door, three people lay on beds attached to respirators and heart monitoring equipment.

An elderly man was wheeled in on a stretcher, coughing and struggling to breathe.

At the emergency department, around 50 people queued for triage, including Covid patients, with one person at the front of the queue telling AFP they had waited for more than an hour.

The emergency room at another medium-sized hospital in downtown Chongqing was also overrun, with around 30 elderly people attached to IV drips, squeezed among beds and chairs.

Several were breathing through respirators and a few had pulse oximeters attached to their fingers.

A cleaner and a nurse at the first hospital told AFP there were several deaths per day since the government’s sudden decision at the beginning of the month to lift health restrictions and end mass testing.

It was not clear if all of the deaths were related to the virus.

On Thursday evening, AFP visited a crematorium in the city’s south and witnessed 40 bodies being unloaded in two hours.

The relatives of several of the deceased said the deaths were due to Covid.

One woman said her elderly relative, who was suffering from cold symptoms, had tested negative but died after they could not get an ambulance in time.

A woman in her 20s told AFP she suspected her father had died of Covid, though he had not been tested.

“He died too quickly, while on the way to the hospital,” she sobbed. “He had lung issues to begin with… He was only 69.”

Under China’s new definition of Covid deaths, only those who die of respiratory failure — and not pre-existing conditions exacerbated by the virus — are counted.

That means many of the dead in Chongqing — and across the country — are no longer even being registered as coronavirus victims.

At the first hospital’s ICU on Friday, the cleaner told AFP it was mostly elderly people who were dying.

Gesturing to a space where a bed had been a little while before, he said: “Look, that old man in there died just now.”