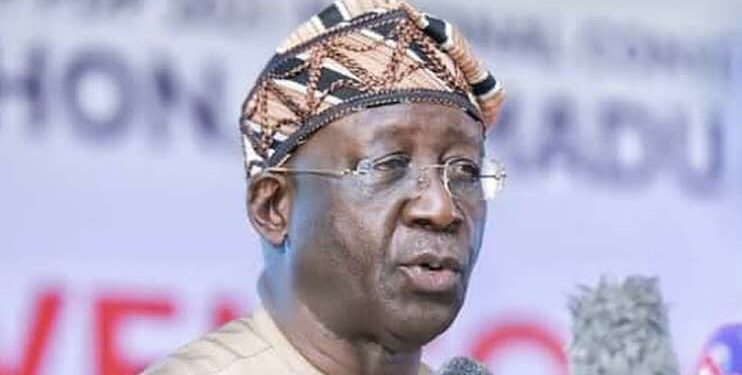 A week after his return from medical vacation, the National Chairman of the Peoples Democratic Party, Iyorchia Ayu, Tuesday, presided over a stormy meeting of the National Working Committee of the party.

The meeting was also attended by the NWC members demanding the resignation of the national chairman.

A national officer of the party, Timothy Osadolor, said that the PDP Deputy National Chairman (South), Taofeek Arapaja; (South-South), Dan Orbih, as well as the National Vice Chairman, (South-South), Stella Effah-Attoe all turned out for the emergency meeting.

Last week, Arapaja and five others returned various amounts paid into their bank accounts to the party, questioning Ayu’s authority to approve such amounts.

The NWC members were said to have returned N122.4m rent stipends paid into their account, alleging that they got the strange bank credit alerts after they queried the whereabouts of over N10bn realised as nomination fees during the party’s primaries.

The N10b was said to have been depleted to N1bn in uncertain circumstances, leading to tension in the NWC.

They also questioned the morality of the payment against the backdrop of media reports which accused the chairman of bribing NWC members to silence them for demanding accountability over the depletion of the N10b party fund.

But a confident Ayu returned to the Wadata plaza headquarters of the party, Tuesday, where he chaired the NWC meeting.

The PDP National Youth Leader, Osadolor explained the agenda of the meeting and the implication of the weighty allegations made by Arapaja and five others.

He stated, “They (NWC members) all attended. I am aware that the embarrassment the six officers brought to the party was part of the agenda of the meeting. As a national officer, I am aware that the constitution of the party frowns on any action that will bring the party to public opprobrium, which they have done.

“The NWC has the character and capacity to institute disciplinary measures against any of its officers. That is on the table.’’

Asked if the six officers may be sanctioned, Osadolor stated: “PDP is a democratic party that can checkmate the excesses of its members and put its house in order.

“I don’t see how they can commit an infraction on the party’s constitution and go scot-free. There is no way they will escape the disciplinary committee that will be set up today (Tuesday). The issue is too weighty to be swept under the carpet.”

Rising from its marathon meeting, the NWC resolved to investigate the allegations that the housing allowance paid to the NWC members was a bribe.

According to a statement by the PDP National Publicity Secretary, Debo Ologunagba, the National Legal Adviser of the party, Kamaludeen Ajibade SAN, will investigate the allegation and report back to the NWC within one week for further action.

The statement read, ‘’The National Working Committee of the Peoples Democratic Party at its meeting on Tuesday, October 4, 2022, thoroughly examined the strange publication by a particular newspaper which reported that the Housing Allowance legally paid by the party to its National Officers was a bribe.

“The NWC also established that the payment passed through due process procedures of the Party by all extant financial regulations and payment approval processes of the party.

“It is also instructive to state that the National Officers who returned their Housing Allowances equally confirmed and affirmed at the meeting that the payment was not a bribe but their due entitlements in line with the Conditions of Service and Entitlement of the Staff and Principal Officers of the party.

“The NWC resolved to conduct an extensive investigation into the circumstances surrounding the said publication in The Nation newspaper of September 26, 2022, which was targeted to cause disaffection among members and stakeholders of the Party as well as bring the Party to disrepute before our teeming supporters all over the world, particularly in an election year.

“Consequently, the NWC has set up an Investigative Committee headed by the National Legal Adviser to conduct an inquiry into the source of the said malicious and injurious publication contained in The Nation newspaper of September 26, 2022.”

It was gathered that the NWC was very stormy as the participants attacked their colleagues who returned the allowance to the party coffers.

A source said, “The NWC members were shouting on top of their voices, hitting the table over the issue of the returned allowances by some members of the party. The meeting chaired by the National Chairman of the party, Sen. Iyorchia Ayu lasted for more than three hours.’’

But another party official claimed the meeting was frank and only discussed how to move the party forward.

He noted, “I wouldn’t want to say that the meeting was defined by members shouting at the top of their voices. The meeting was about selling the ideals of the party with the members being frank with themselves.

“We are calling facts as they are. What is more important is that the party remains unsinkable by lies and vendetta.”