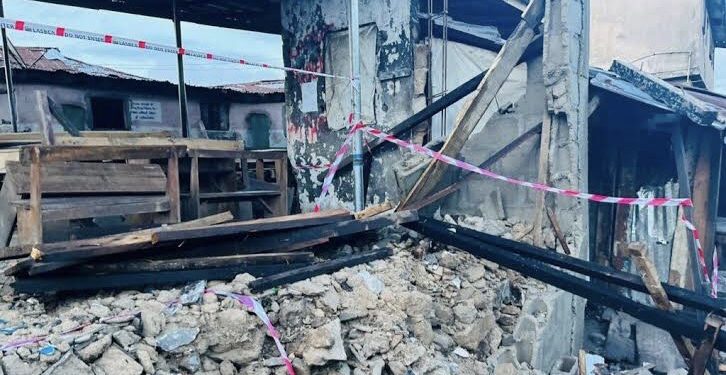 The mother of one of the children killed by a school’s fence in Amukoko area of Lagos on Saturday, said that her 10-year-old daughter, Judith Ndujie, was supposed to resume JSS 1 on Monday.
She also said on Saturday morning, before she left for work, was the last time she saw late Judith.

Judith, who lived on an adjacent street, Olumoko, told her father that someone sent on an errand.
Her route took her near the school, and it was while walking past the school that the fence, which was under construction, collapsed on her.

She was said to have died on the spot after bleeding and screaming ‘my chest’.

Three-year-old Samat was playing with friends in an empty mosque adjacent to the school when the fallen fence and Judith’s tragedy caused commotion.

Samat rushed out and stood in front of her mother’s shop, which is close to the school.

He was observing the commotion when another part of the fence suddenly collapsed on him.
He died immediately.

Speaking to Vanguard, Judith’s mother said she left her daughter with her father before leaving for work and was given the news of her child’s death on her return.

According to her, her daughter clocked 10 years on May 16 and was supposed to resume J.S.S. 1 on Monday.

She alleged that the reason the fence fell was because it was not on solid foundation and there were no strong roots to the fence.

The teary woman pleaded for her daughter’s corpse to be released to her because Saturday morning was the last time she saw her daughter, before she left for work.