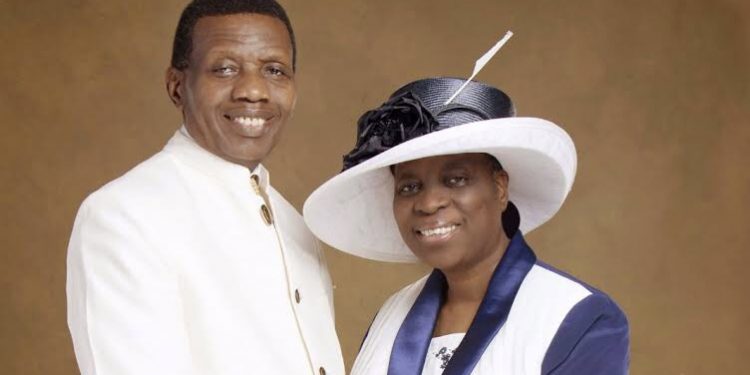 The General Overseer of the Redeemed Christian Church of God, Pastor Enoch Adeboye, has said he was the poorest of all the men who chased after his wife, Foluke Adeboye.

According to him, Foluke left all the famous people to get married to him while he was also least known at the time.

The post was accompanied by a photo showing the couple standing beside a gigantic cake.

He wrote, “My darling @pastorfoluadeboye the woman who has suffered with me, she stood by me when we had nothing. I was the poorest and the least known of all the men after her 55yrs ago. But she left all those who were famous, well to do and she picked me. Thank God, God had made us a success and proven all the opposition back then wrong. Here is to 55 more years of double love, double grace, double peace, double of heaven on earth. #PerfectJubilee #CoupleGoals #GodFreedUs.”

Reacting, a Facebook user, Nfor Julius, wrote, “Happy Marriage Anniversary Sir/Ma’am. Congratulations on overcoming all odds and being who you are today. Many more fruitful and impactful years ahead.”

Ayeni Olamide Lamzars wrote, “Congrats daddy. Even when a man is poor. But he knows God and he is hardworking and not idle… nothing can stop him.”

Akusu Avwerosuo wrote, “Happy anniversary Daddy and Mummy. I celebrate you and I honour the grace of God upon your lives, congratulations. Daddy, Mummy continues to flourish in the glory of God in Jesus name Amen.”

Defunke Oladimeji wrote, “Congratulations, Daddy and Mummy G. O. May your strength in love be always renewed and multiplied for the next 55 years, in Jesus Name.”