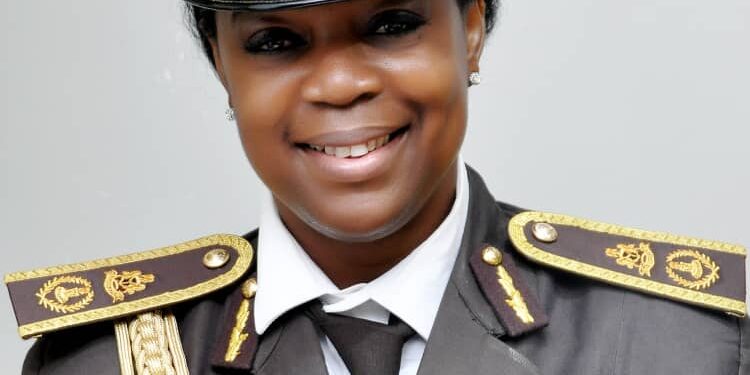 It was accolades-packed for retiring Lagos Passports boss of Immigration Service, Comptroller Anne Agbim as officers and friends of the Nigeria Immigration Service (NIS) rolled out the drums at the valedictory session in Lagos to honour her.

Agbim, who was baded farewell to active service on Thursday, is checking out after 35 meritorious years of unblemished service to nation.

The Comptroller-General of Immigration (CGI), Mohammed Babandede, at the valedictory service described her as “Wisdom personified official that served in NIS without any blemish”.

According to Babandede, Agbim was committed to work and never compromised the values of the service.

Represented by the Assistant Comptroller-General (ACG) in charge of Zone A, Mohammed Alfa, Babandede urged other officers to imbibe the good legacies left behind by Agbim, by displaying good work ethics.

He further noted that many officials might not be able to stand boldly or have valedictory session held for them in the way the service did for Agbim.

“I plead with all officials to learn from what is happening today. Agbim is getting NIS honours today because her performance is superb,” Babandede said.

“She ensured that the activities of touts, all forms of indiscipline and sharp practices in Passport commands were stopped,” he said.

He recalled that passport command was carved out as a seperate command in 2011 to fast track passports’ services in the country.

According to Yari, Agbim rendered all necessary support to Ikoyi Passport office to enable it to migrate to the new non-tearable system that was launched by President Mohammadu Buhari in 2019.

The Comptroller of Immigration Service (CIS) in charge of Seme border patrol, Mr. Lawrence Akpobi, commended Agbim for emphasising the importance of tenacity in NIS job. “We are very proud to associate with you,” Akpobi said.

“I am humbled to have served 35 years meritoriously in NIS. These years have been the best of my life. I have been trained, enjoyed loyalty and collaborations.

“The CGI remains my mentor. I thank him so much for giving me the opportunity to serve. He has invested in all of us and taken Immigration Service to greater heights. His rise to the top is a testimony that God is great.”