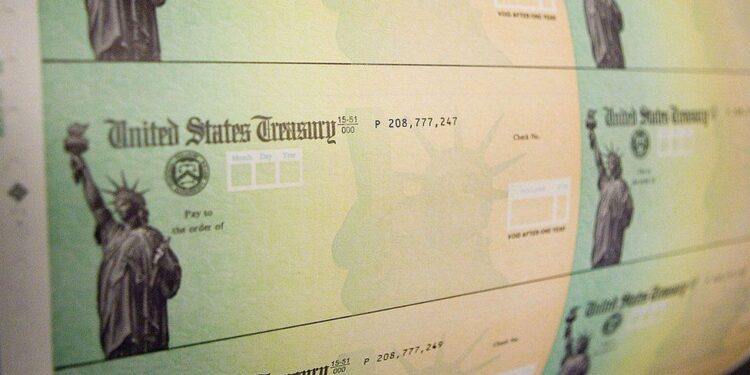 Stimulus cheques are part of the government's coronavirus relief package

A US man allegedly shot dead three adults and a child at a house after arguing with his girlfriend about her stimulus cheque, court records show.

The cheques are part of President Joe Biden’s economic relief package to help Americans impacted by the pandemic.

Police say the four victims were found at a home in Indianapolis, Indiana.

Malik Halfacre, 25, has been charged with murder, attempted murder and robbery.

According to US media reports, Mr Halfacre’s girlfriend was found wounded outside the home and directed police to the property where they found the three adults and a seven-year-old child shot dead on Saturday.

A six-month-old girl was reported missing and was later found unharmed at the home of Mr Halfacre’s sister, ABC News reported, citing police.

Mr Halfacre was later arrested following an armed standoff at a house in Indianapolis. In an affidavit filed on Tuesday, he told police that he and his girlfriend “were arguing because he wanted some of her stimulus cheque”.

“Mr Halfacre admitted to shooting all of the deceased individuals in the house,” the affidavit quoted police as saying.

He allegedly told investigators that after “everyone was shot, he took the money”, according to the affidavit.

Mr Halfacre is due to appear in court later this week.

The $1.9tn (£1.4tn) economic relief package was recently signed into law by Mr Biden in the first major legislative win of his presidency.

It includes $1,400 stimulus cheques, an extension of unemployment benefits, and a child tax credit that is expected to lift millions out of poverty.

Mr Biden said the relief package would rebuild “the backbone” of the country.