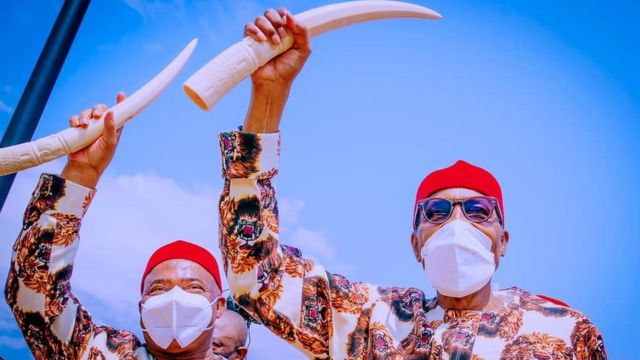 President Mohammadu Buhari, under tight security, on Thursday visited Imo State, which is seen as the hub of the operation of the pro-Biafra group, IPOB, in Nigeria’s South-East.

The agitation for the independent republic of Biafra has led to killings and destruction in the South-east.

Mr Buhari, who is on a one-day working visit to  to the state, commissioned projects executed by the Governor Hope Uzodinma’s administration, spoke on the importance of security, as well as infrastructure, on the lives of the people.

“If there are no roads, if there is no security, what can people do? Definitely nothing,” Mr Buhari said in his brief address in Owerri, the state capital.

He praised Governor Uzodinma for his administration’s effort to develop the state.

The president commissioned a polytechnic, a road project, a flood control tunnel and a new executive chamber,

“Seeing is believing,” the president said of the projects he saw in the state.

“I accepted the invitation to come and see what the governor wanted me to see, and I have seen enough which certifies his integrity.

“I am very impressed with what he has done because I have gone through the same problem at the centre to make sure that infrastructure is what would enable the people to man their own businesses. I am very pleased with what I have seen,” Mr Buhari said.

Apart from Governor Uzodinma, Governor David Umahi of Ebonyi State, and the candidate of the  All Progressives Congress  for the forthcoming governorship election in Anambra, Andy Uba, were among those who received President Buhari.

The president is expected to hold a town hall meeting with leaders of the five states in the  South-east geopolitical zone before departing for Abuja later today.