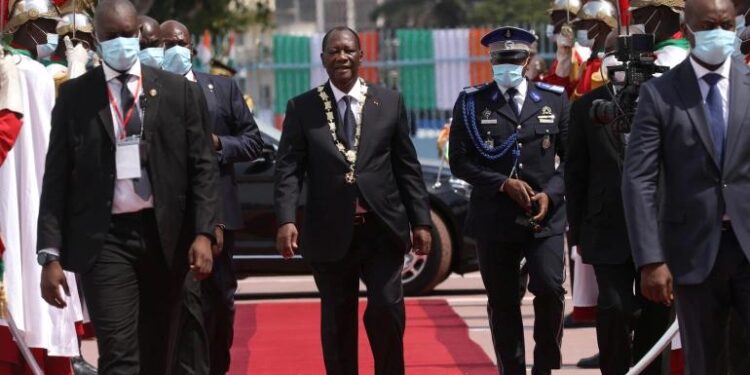 When Ouattara was declared the winner of the October 31 vote with 94 percent, the opposition cried foul and announced a ‘transitional government’.

Ivorian President Alassane Ouattara has taken the oath of office for a controversial third term, urging his political opponents to help “defuse tensions” following the deaths of dozens of people in election-related violence and the arrest of opposition figures.

Final results last month showed the 78-year-old winning re-election with more than 94 percent of the October 31 vote, which opposition parties largely boycotted and dismissed as illegal.

Monday’s solemn swearing-in ceremony in the commercial capital, Abidjan, was attended by 13 African counterparts but was snubbed by the opposition. Former French President Nicolas Sarkozy was also among those present.

“I ask all political parties to seize this new opportunity … to defuse tensions through dialogue,” said Ouattara.

He had said earlier that he asked Prime Minister Hamed Bakayoko to “resume discussions” with the opposition, which continues to contest the legitimacy of the polls.

Opposition groups said Ouattara violated the constitution, which limits presidents to two terms. Ouattara had maintained that the approval of a new constitution in 2016 allowed him to restart his mandate.

When Ouattara was declared the winner, the opposition cried foul and announced a rival, “transitional government” in protest.

Several opposition leaders were arrested, with legal proceedings over “sedition” launched against them.

Pre- and post-election violence has killed at least 85 since August, according to an official toll.

For many Ivorians, painful memories were stirred of the aftermath of disputed elections in 2010.

A political standoff was followed by a brief civil war in which approximately 3,000 people died and an estimated 1.3 million people fled their homes in the country, the world’s top cocoa producer.