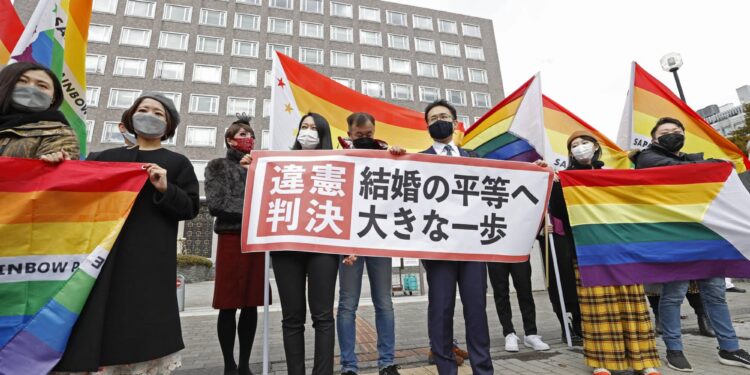 A Japanese court has ruled that not allowing same-sex marriage is unconstitutional, according to Kyodo News agency, a landmark decision that could herald a new era for marriage equality in the country.

The case began in 2019, when three couples in Hokkaido prefecture filed a lawsuit claiming 1 million yen (about $9,160) in damages each for the psychological harm caused by the government not allowing same-sex marriage, Kyodo News reported.

Japan does not recognize same-sex unions nationwide, although some parts of the country issue “partnership certificates” that grant some rights benefiting heterosexual couples to same-sex couples.

Sapporo District Court in Hokkaido ruled Wednesday the government’s lack of recognition for same-sex marriage was in breach of a section of the constitution that requires equal laws for everyone, Kyodo News reported.

But the court dismissed the couples’ claims for damages, according to the agency.

The law in Japan

Homosexuality has been legal in Japan since 1880, and the country is relatively liberal compared with some other Asian nations. Only one place in Asia has legalized same-sex marriage — Taiwan.

Two Tokyo wards passed an ordinance in 2015 that allowed same-sex couples to get “partnership certificates” giving them some of the same rights as married heterosexual couples. Since then, dozens of municipalities have passed ordinances unofficially recognizing same-sex relationships.

But activists say Japan’s LGBTQ community still face prejudice and the country hasn’t yet enacted a national anti-discrimination law that would protect LGBTQ people from discrimination.

Non-profit Human Rights Watch, along with other LGBTQ organizations, has been calling on Japan to adopt an Equality Act ahead of the Tokyo 2021 Olympics.

We Are Working To End ASUU Strike – FG