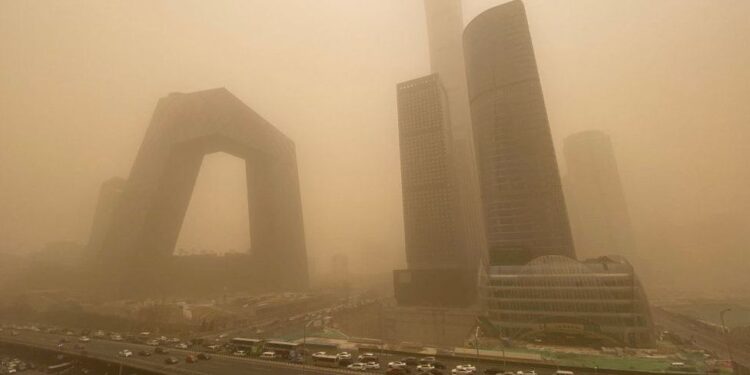 The Chinese capital of Beijing was covered in thick dust on Monday as it experienced what its weather bureau has called the worst sandstorm in a decade.

The storm caused an unprecedented spike in air pollution measurements – with pollution levels in some districts at 160 times the recommended limit.

Hundreds of flights were cancelled or grounded as the sky was covered by an apocalyptic-looking orange haze.

The sand is being brought in by strong winds from Inner Mongolia.

China’s Global Times media outlet reported that at least 12 provinces in the country, including the capital, had been affected, and the weather was likely to continue through the day on Monday before improving at night.

“It looks like the end of the world,” Beijing resident Flora Zou told the Reuters news agency. “In this kind of weather I really, really don’t want to be outside,” she said.

The WHO currently sets safe levels of air quality based on the concentration of polluting particles called particulate matter (PM) found in the air.

According to news wire AFP quoting the Global Times, the PM 10 pollution in six central districts reached “over 8,100 micrograms per cubic metre” on Monday. The WHO considers levels between 0-54 as “good” and 55-154″ as “moderate” levels of PM 10.

AFP added that schools had been told to cancel outdoor events, and those with respiratory diseases advised to stay indoors.

Beijing was historically hit by sandstorms on a much more regular basis, but pollution reduction projects – including prohibitions on new coal-fired power plants, restrictions on the number of cars on the road and reforestation – have significantly improved air quality. Sandstorms like the one seen this week, caused by wind, are harder to control.

But Beijing and surrounding regions have suffered from high levels of pollution in recent weeks, with one Greenpeace activist telling AFP that it was a result of “intense” industrial activities.

These, he said, exacerbated sandstorm conditions, which were the “result of extreme weather conditions and desertification”.