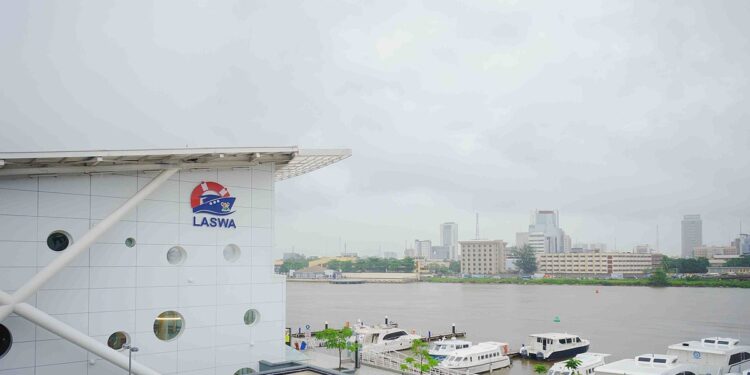 The Lagos State Government has formally kicked off commercial waterways transportation in the Ilaje, Bariga area of the state.
The event, which held, last Wednesday, marked the commencement of commercial operations in waterways transportation by the Bariga Water Ferry in Bariga.
The managing director of Lagferry, Hon Abdubaq Ladi Balogun said that the Bariga waterfront jetty, which was commissioned last year to ease movement was one of the best solutions to the traffic problems in Lagos state…
He said, “It is a well known fact that one third of Lagos state lands is covered with water, and the govenor wants to utilise the opportunity available to ease traffic gridlock within the state”.
He also explained that the agency started its operations on the 4th of Febuary 2020, and that they have successfully conveyed 86,000 passengers around the state, this was achieved with the support of the Governor.
According to Balogun, the Lagferry is safe and secure.
He also said that it has some other amenities such as free wifi, USB port charger, as well an insurance cover on all passengers on them in case of an unforeseen circumstances.
He said that the water transportation helps to make travel time shorter.
He explained, “A journey from Badore to VI is 5 minutes while Badore to Ikoyi is 12 minutes, while Bariga to Ebute Ero is 10 minutes.”
He also opined that it would be of great advantage to the students and lecturers of the tertiary institutions around the area, such as University of Lagos, among others, adding that market women will also see it as a massive advantage.
The member representing Somolu 2 in the Lagos state house of assembly, Hon Rotimi Abiru in his goodwill message said water transportation is an alternative to ease traffic congestion on Lagos roads.
The chairman of Somolu, Hon Abdulhameed Salawu (DULLAR) in his short message thanked the l Governor and Lagferry for deeming it fit to bring the terminal unto life, and appealed to market men and women to be using Lagferry, because of its safety and conformability.

The Origin of the Lebanese Elias' Family In Lagos