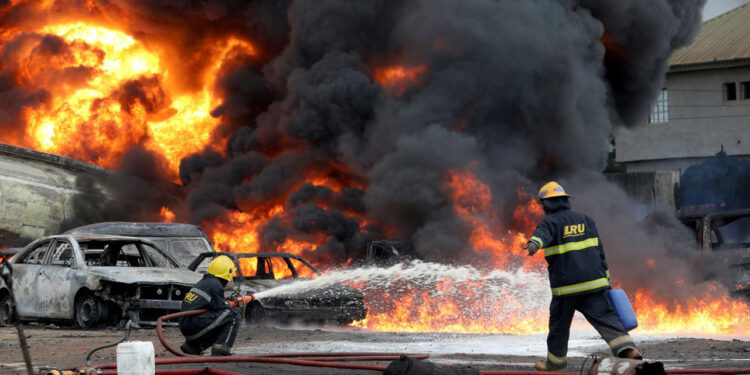 Men of the Lagos State Fire Service and the Lagos State Emergency Management Agency (LASEMA) have, Sunday, averted a possible pipeline explosion after some thugs vandalised a Nigerian National Petroleum Corporation (NNPC) pipeline at Iyana-Odo on Atlas Cove-Mosimi System in Egbe-Idimu Alimosho area of the state.

According to reports, some thugs were said to have vandalised a pipeline in an attempt to siphon Premium Motor Spirit (PMS).

Confirming the situation, the Acting Head, Lagos State Fire and Rescue Service, Mrs. Margret Adeseye, said the area had been cordoned off to prevent any disaster.

She noted that they received a distress call around 05:41a.m. from Peace Estate, after Petrocam Bus Stop, Isheri, and firemen from Ikotun Fire Station were swiftly mobilised to the scene.

Adeseye revealed, “On getting there, it was discovered that PMS was gushing out from the pipeline linking Isheri to Igando and environs of Alimosho, Lagos.”

While the acting head emphasised that the NNPC pumping operations had been suspended, she hinted that men of the Lagos State Fire and Rescue Service and LASEMA were putting the situation under control.

She further noted that the Nigeria Security and Civil Defence Corps (NSCDC) was providing security to forestall any imminent danger.

She cautioned residents of the area to abstain from striking any naked fire to avoid possible inferno pending conclusion of the repair works by the NNPC.