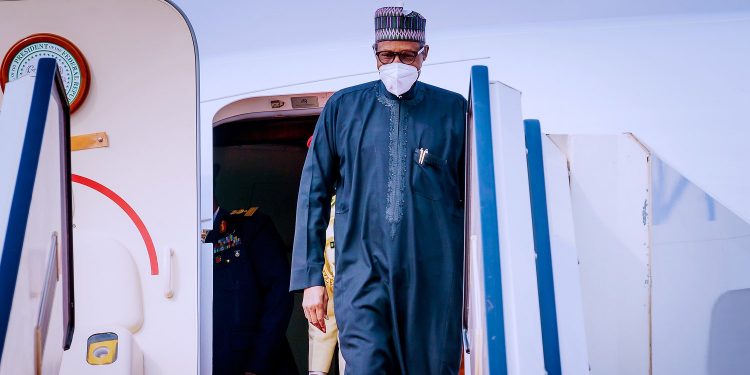 President Muhammadu Buhari is in Lagos State for a one-day visit.

The Nigerian leader, who came to the South West State early Thursday, will commission some projects including new warships and boats at the Naval Dockyard in the Victoria Island area of the state.

He will also attend the book launch of a former Chairman of the All Progressives Congress (APC), Bisi Akande, during the visit.

Upon his arrival at the Presidential Lounge of the airport, Buhari was received by Governor Babajide Sanwo-Olu of Lagos State and other officials.

Prior to Thursday’s visit, the Lagos State Traffic Management Authority (LASTMA) had issued a traffic advisory to commuters.

In the statement, LASTMA noted that the “Ahmadu Bello Way, from Adeola Odeku Intersection to Adetokunbo Ademola by Eko Hotels Roundabout will be temporarily closed to traffic and traffic diverted to Adeola Odeku, Akin Adesola to connect desired destination.

“Akin Adesola connecting Ahmadu Bello Way by IMB will be temporarily closed to traffic and traffic will be diverted to Oyin Jolayemi, Oko Awo and Sanusi Fafunwa to connect desired destinations.

iii) back to Civic Centre to connect destination.”

It noted that  “all adjoining streets/feeder roads leading to Ahmadu Bello Way from Adeola Odeku Intersection, as well as those leading to Eko Hotels, from Adetokunbo Ademola Roundabout (Eko Hotels Roundabout), will be temporarily closed to traffic from early hours of the day on Thursday, 9th December, 2021.”