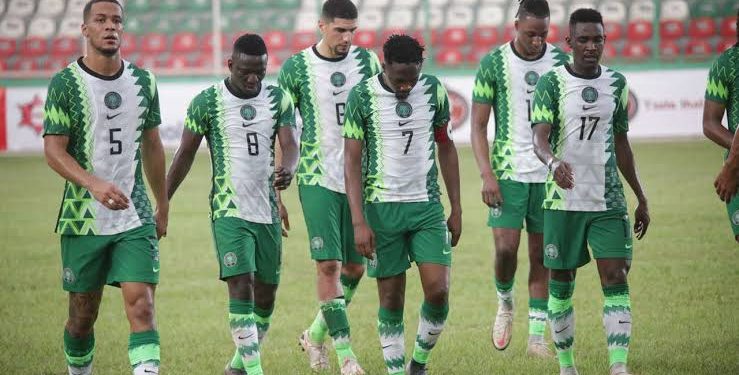 Fans were bitterly disappointed with the Super Eagles players following the team’s lacklustre performance against Central Africa Republic in the 2022 World Cup qualifier at the Teslim Balogun Stadium, Lagos on Thursday.

The Eagles suffered a shock 1-0 defeat in Lagos to end their 100 per cent start to the World Cup qualifiers.

Gernot Rohr‘s men were below par despite parading stars against a country who are rated 123rd in the world and were punished late into the game.

Raoul Savoy’s men produced the best chances of the game, much to the frustration of the fans, who started chanting and booing their own team, while another section of the fans praised CAR players for their bravery.

Despite five minutes additional time, fans trooped out of the stadium immediately the late goal was scored.

Speaking after the game, the fans were expressed disappointment with the performance of the Eagles.

Afolabi Obasa said it was a poor performance from the Eagles.

“It was a below average performance from the Eagles, it wasn’t good enough and I am so disappointed.

“The approach of the players to the game was nothing to write home about and even if we make it to the World Cup, a lot needs to be done. But first the coach must take the blame for this poor outing against CAR because once the tactics was wrong there is nothing the players could do.”

“We were expecting a better performance from the Eagles but unfortunately we only saw flashes of brilliance from Victor Osimhen and Chidera Ejuke.

“Our defenders on many occasions were porous. The CAR players are very young and were hungrier to win the game. I am very disappointed with the performance I saw today.”

“I was almost brought to tears after goal was scored because despite the poor performance I was hoping the Eagles could still get a goal,” a female fan Funke Akintoroye said.

“It was a disappointing performance from the players and I think they underestimated their opponents. It’s so sad but I hope we can get a win in our next game.”

Ekene Samson added, “I was not surprised when fans started booing the team as this was expected anytime the Eagles are not doing well but we hope they will do well in their other games.”