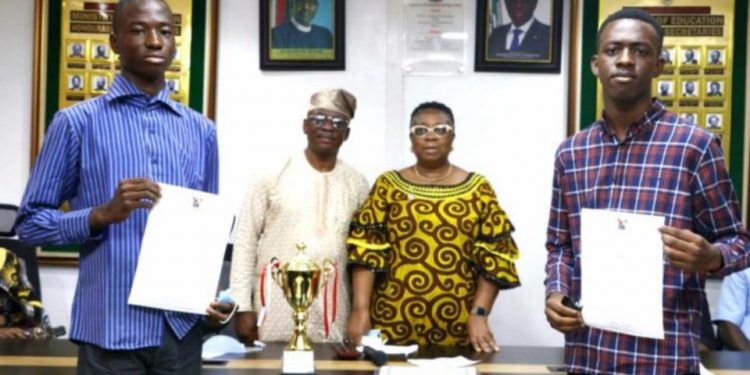 The two scholarship beneficiaries, Sholana Taiwo Mohammed (left) and Abiodun Anuoluwapo Favour with the Lagos State Commissioner for Education, Mrs Folasade Adefisayo (right) and Permanent Secretary, Mr Abayomi Abolaji at the prizes presentation to all the award winning secondary school students in Lagos State in the last one year, at Alausa, Ikeja, on Friday.

Addressing the awardees at a ceremony held at the Ministry of Education, Secretariat, Alausa at the weekend, the commissioner for Education, Mrs. Folasade Adefisayo, said the feat of the students in various national and international competitions is an authentication of improved quality of education system in the state.

Adefisayo identified the various efforts of the students stressing that one of the awardees, Olamide Marvelous who represented the state at the African Leadership Academy competition, an international competition emerged as the “Best Critical Thinker”.

She said, “This student has continued to make us proud as a state and our investment as a government in the education sector is no doubt yielding positive results”.

According to her, the state government has continued to introduce various initiatives and innovations geared towards improving the educational system, stressing that some of these programmes are to enhance teaching and learning outcomes in schools.