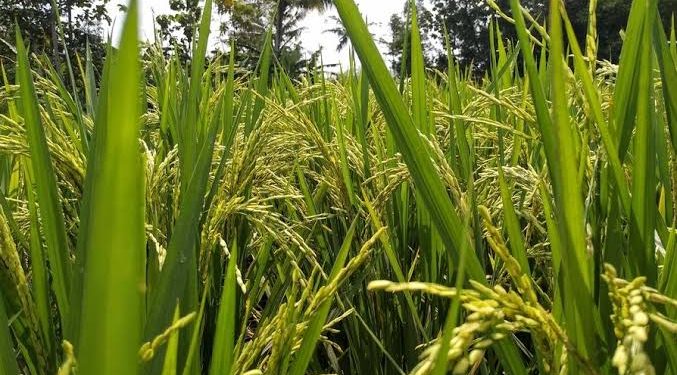 This is to improve productivity for food security in Lagos State and Nigeria in general.

Speaking during a Field Day for Rice Seed Outgrower Scheme to farmers, the State Project Coordinator of APPEALS, Mrs Oluranti Sagoe-Oviebo, said APPEALS Project is supporting and building farmers’ productivity in the rice value chain with technology for food security.

She said since its inception, Lagos APPEALS Project has supported 20 clusters of Ofada rice farmers with modern technology and necessary supports to improve farming.

Sagoe-Oviebo was accompanied by top officials of Lagos APPEALS Project, African Rice and farmers, during a visit to beneficiaries of the Project Rice Seed Outgrower Scheme at Origanringan, Epe and Okegelu in Lekki areas of the State.

She said Governor Babajide Sanwo-Olu has a keen interest in agriculture and that was why the State Government is fully supporting APPEALS Project to empower farmers, especially youths and women with the necessary technology for productivity, improved livelihood and food security.

“Lagos APPEALS Project wants to increase the productivity of rice farmers in Lagos State. We want to ensure that Ofada Rice gets to foreign countries.

“Our rice is better than foreign rice. It is more nutritious than the imported rice. So, I want to implore farmers to invest more in farming activities, especially in the rice value chain.

“We are using this opportunity to call on investors and entrepreneurs to invest in agriculture for food security. If there is no food, there is no guarantee that there would be security in the State or any country.

“So, it is high time investors came on board and invest in agriculture. The gap in food demand cannot be overemphasised,” she said.

Also speaking, a rice seed expert from the African Rice Center, International Institute of Tropical Agriculture (IITA), Dr Abraham Shaibu, said the Center has supported farmers in Lagos to produce good quality Ofada rice by assisting them with technology to improve their productivity.

He said African Rice has identified and produced a pure strain of Ofada rice seed with a high yield for Lagos APPEALS Project farmers.

Meanwhile, he added that the seed has been successfully cultivated by the Lagos APPEALS Project outgrower and a willing off-taker is available to take it up and sell it to top rice producers.

Speaking during the visits to their farms, representatives of different clusters expressed gratitude to Governor Sanwo-Olu’s administration and Lagos APPEALS Project for having the interest of farmers at heart by investing and empowering them with quality Ofada rice strain.

A rice farmer at Origanringan in Epe, Mr Segun Omotayo, who has been in the rice farming business for close to 20 years, said the assistance provided by Lagos APPEALS Project has helped to increase their productivity from about 1.5 tonnes to three tonnes per hectare based on rice seeds given to them by the Project.

Mr Giwa Adeolu, a rice farmer, who is coordinating clusters of Ofada Rice farmers farming on 500 hectares of land at Okegelu in Lekki, said the technology provided by Lagos APPEALS Project has contributed positively to the rice farm, which according to him is an investment that is worth N350million.

He said they are expecting nothing less than 2.5 to 3 tonnes per hectare by the time they harvest their produce in the next two months.

“We appreciate Lagos APPEALS Project for their support. They empowered us and gave us adequate support to the extent that presently we have five clusters and we cultivated over 500 hectares of land in the same place.

“They gave us nets to cover our plants to chase away the picker birds, which is a major challenge of rice farmers all over the world.

“This initiative sounds so loud that more farmers are coming out now to benefit from what Lagos APPEALS Project is doing for rice farmers in the State,” he said.

Trouble in Rudeboy Ville as Anita Okoye Files For Divorce