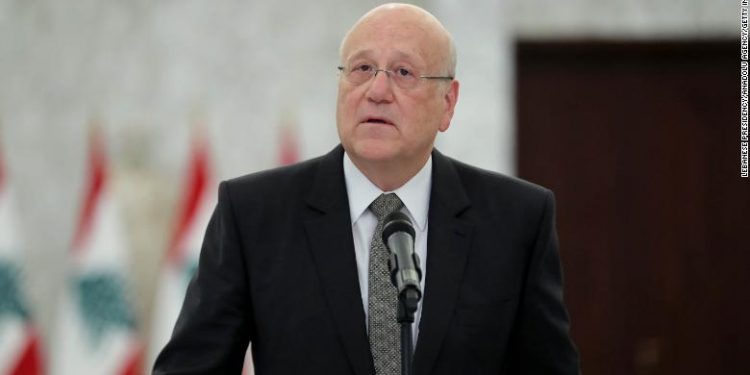 BEIRUT, LEBANON - AUGUST 05: (----EDITORIAL USE ONLY ?? MANDATORY CREDIT - "LEBANESE PRESIDENCY / HANDOUT" - NO MARKETING NO ADVERTISING CAMPAIGNS - DISTRIBUTED AS A SERVICE TO CLIENTS----) Former Prime Minister Najib Mikati, who was assigned to form the new government, holds a press conference after meetingt with Lebanon??s president Michel Aoun (not seen) in Beirut, Lebanon on August 05, 2021. (Photo by LEBANESE PRESIDENCY/Anadolu Agency via Getty Images)

A new government has been formed in crisis-ridden Lebanon, ending a more than year-long power vacuum that began shortly after the August 2020 Beirut port blast.

Prime Minister Najib Mikati, a billionaire who has already twice served as premier, will lead a cabinet of ministers that will preside over an economic depression which the World Bank considers one of the world’s worst since the mid-19th century.

Mikati visited Lebanese President Michel Aoun at the Baabda Presidential Palace where he signed a decree to form the new government in the presence of Parliament Speaker Nabih Berri, the Lebanese Presidency said.

Addressing the nation after the meeting, Mikati said he would try to “stop the country’s collapse.”

“The situation is difficult, it is very difficult,” Mikati said as his voice choked up during an emotional speech. “However it is not impossible if we unite … our priority is to appease the suffering of the Lebanese people” he said, adding: “I won’t spare an opportunity to open doors with the Arab world. Today Lebanon is in need of the Arab world.”

The new government includes George Qiradhi, who was previously the host of popular television show, “Who Wants to Be a Millionaire,” and a controversial finance minister Yousuf Khalil. Khalil was the director of financial operations at Lebanon Central Bank and the architect of a financial program that sought to attract deposits by offering high-interest rates.

The program contributed to a banking crisis that has decimated deposits around the country.
The new health minister, Firass Abiad, heads the first public hospital that received coronavirus patients and played a leading role in tackling the pandemic.

Foreign Minister Abdallah Bouhabib was Lebanon’s ambassador to Washington from 1983 to 1990.

Lebanon is facing a severe financial crisis which has resulted in the currency losing over 90% of its value. Following Friday’s announcement, the Lebanese lira appreciated on the black market from 19,000 lira to the dollar to around 15,000 to the dollar.

The cabinet is also expected to come under massive international pressure to usher in economic reforms, ensure 2022 parliamentary elections take place as scheduled, and to restart negotiations with the International Monetary Fund.

Mikati was the third politician to be tasked with forming a cabinet after former Prime Minister Hassan Diab resigned in the wake of a port blast that claimed more than 200 lives and devastated whole neighborhoods in the capital.

Days after the explosion, French President Emmanuel Macron spearheaded an initiative to broker a political resolution in Lebanon in a bid to stave off state collapse.

Leading politicians at the time promised to form a government within weeks, but a series of failed negotiations between rival groups put the formation process on a collision course, exacerbating a rapidly deteriorating economic crisis that saw the currency lose over 90% of its pre-crisis value and sparked severe fuel and medicine shortages.

Mikati and his brother, and main business partner, Taha are the richest men in Lebanon. In July, Norwegian telecoms operator Telenor sold its Myanmar operations to Mikati’s company, the M1 Group, for $105 million.