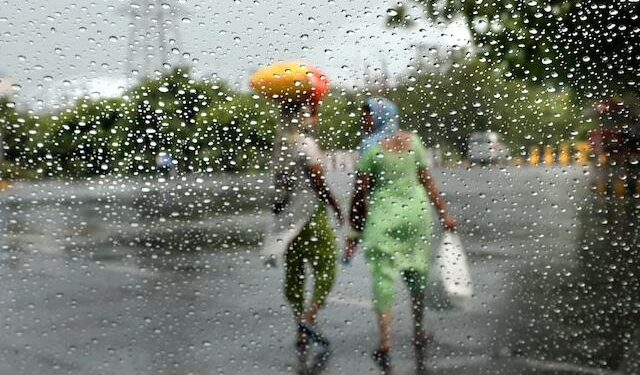 Indian women are seen through a glass with rain drops after a sudden rainfall on the outskirts of New Delhi on Thursday.

Bihar, one of India’s poorest states, was the worst hit. At least 90 people were killed by lightning, according to Avinash Kumar, a senior disaster management official in the state.

The dead included several children and farmers who were tending to their fields, local media reported. Many of the victims had gone to feed livestock or plant fresh crops.

Ritik Kumar, 24, was heading home from the fields at lunchtime in the village of Khajuria under a heavy rain when lightning ripped across the sky. He heard several loud crashes, then saw a “ball of fire” fall on another villager walking just ahead of him.

Kumar and about a dozen others ran for their lives. Later they returned to find Rajaram Yadav, 45, lifeless on the ground with severe burns on his shoulder. They rushed him to a nearby hospital where he was declared dead.

Lightning kills more than 2,000 people a year in India, but Thursday’s single-day toll was the deadliest in recent memory.

Lightning strikes in northern India tend to take place between April and July, a period that straddles the arrival of the monsoon rains.

Last year, 1,333 people died in lightning strikes during those four months, according to a report by a nongovernmental group that aims to reduce such fatalities. Most of those killed lived in rural areas, it said, and were sheltering under trees when lightning hit.

In some areas, local authorities have begun using text messages or mobile apps to warn residents of potential lightning activity based on sensor data and forecasts.

But such tools are not widely used, particularly in places like Bihar, a state bordering Nepal that is home to more than 100 million people.

In the state’s Madhubani district, three members of a single family — a 65-year old farmer together with his son and daughter-in-law — were killed instantly when they were struck by lightning while planting seedlings for their rice crop, said Anil Kumar Bhindwar, the head of a village council.

The state has received abundant, on-time monsoon rains, Bhindwar said, and farmers are rushing to sow their crops to take advantage of the favorable planting conditions. But this time, the rush “proved disastrous,” said Bhindwar.

By June, once the monsoon kicks in, much of the area can witness a foot of rainfall — or more — per month. Moisture streaming north from the Bay of Bengal enhances the deluges, while increasing the chances of nasty thunderstorms.

A thunderstorm can produce hundreds of lightning strikes, some of which remain in the clouds while others hit the ground.

The government of Uttar Pradesh, India’s most populous state just west of Bihar, said Thursday that 24 people were killed by lightning.
On Friday, weather authorities issued a fresh alert for more powerful thunderstorms, heavy rainfall and lightning across a large swath of Bihar. The situation is likely to persist for three days, said Vivek Sinha, director of the Indian Meteorological Department in Patna, the state capital.

Authorities urged people to heed weather warnings and remain indoors. An advisory printed in all local newspapers said people should stay away from bodies of water and avoid taking shelter under trees.
“We humbly appeal to farmers to take extra precautions and stay indoors during rough weather to escape disaster,” said Nitish Kumar, the chief minister of Bihar, in a statement.