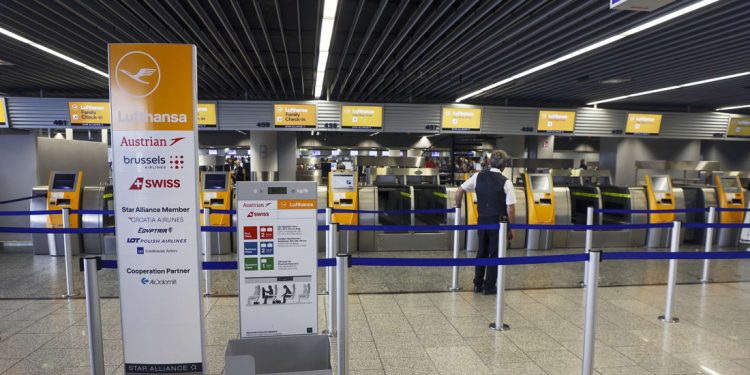 More than 1,000 Lufthansa flights have been canceled so far due to this week’s strike action, with more than 130,000 passengers impacted.

The German airline announced yesterday it would cancel nearly all of its German-based flights in Germany on Wednesday.

Given that a strike of ground staff by trade union Ver.di will have “a massive operational impact in the middle of the peak travel season,” the airline said it “has to cancel almost the entire flight schedule at its hubs in Frankfurt and Munich for Wednesday.”

With the summer holiday season underway, the airline said it was already working under high pressure to reestablish flight schedules for this weekend, following previous strikes. Wednesday’s strike may still lead to individual flight cancellations or delays on Thursday and Friday, Lufthansa warned.

At Frankfurt airport, a total of 678 flights will be canceled, 32 of them on Tuesday and 646 on Wednesday, according to Lufthansa. An estimated 92,000 passengers will be affected.

At the Munich hub, a total of 345 flights are set to be canceled, including 15 on Tuesday and 330 on Wednesday. An estimated 42,000 passengers will be affected, Lufthansa said.

Lufthansa, which is Germany’s flag carrier, added that rebooking capacities for passengers affected by cancellations are very limited.

The union Ver.di is calling for a 9.5% wage increase for Lufthansa ground staff, with a minimum increase of €350 ($368) per month for 12 months. Staff are overworked due to significant staff shortages, high inflation and a three-year wage freeze, the union said.

Around 20,000 workers have been asked to participate in the Ver.di strike, including ground staff, counter staff, and aircraft technicians.

Lufthansa had offered “very substantial pay increases over the next 12 months,” he said, adding that the strike action “is simply no longer proportionate.”

Lufthansa’s head of media relations Martin Leutke told reporters Wednesday that the “massive strike on the backs of customers is not understandable and not justified” after having gone through two rounds of negotiations with the company.

He said the company is trying to rebook travelers on the best alternative routes possible and advised customers who don’t have confirmed flights Wednesday to not come to the airport, saying “resources are scarce here and we can probably help better digitally than here at the airport.”