Man arrested after food injected with needles at supermarkets 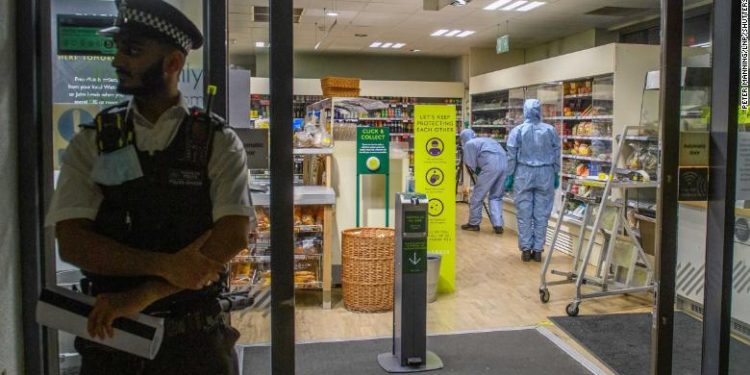 Mandatory Credit: Photo by Peter Manning/LNP/Shutterstock (12368917h) Forensic investigators and a police officer at a Little Waitrose store on Fulham Palace Road following the arrest of a man on suspicion of contamination of goods with intention of causing public harm or anxiety after foodstuffs at supermarkets were injected with needles. Metropolitan Police were called at approximately 19:40BST on Wednesday 25/08/2021 after a man was reported to be shouting abuse at people in the street. The man is reported to have gone into three supermarkets in Fulham Palace Road and injected foodstuffs with a number of needles. Man arrested on suspicion of contamination of foodstuffs in Fulham, London, UK - 26 Aug 2021

A man has been arrested on suspicion of contaminating food after processed meat and microwaveable products were injected with needles at three London stores.

Metropolitan Police officers were called at around 7.40 p.m. local time (2.40 p.m. ET) Wednesday following reports of a man shouting abuse at people in the street, according to a statement from the force Thursday.

He was arrested “on suspicion of contamination of goods with intention of causing public harm or anxiety,” continued the statement.

The affected supermarkets have been closed and crime scenes are in place, said police.

Anyone who bought food from the three affected supermarkets on Wednesday evening has been advised to throw it away as a precaution.

Police believe that processed meat and microwaveable products were affected.

“It is currently unknown as to how many items have been contaminated, or what with,” reads the statement.”Investigations are on-going to establish if other businesses in the area are involved in the incident.

“Environmental health experts are working with the affected supermarkets, which police named as Little Waitrose, Tesco Express and Sainsbury’s Local.