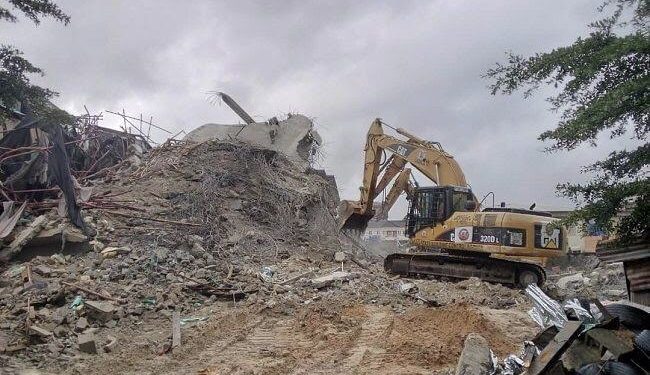 Emergency workers on Monday afternoon recovered four more bodies from the rubble of the collapsed seven-storey building in Lekki, Lagos.

These recoveries, which occurred between 10:25 am and 2:30 pm brought the death toll to six.

The Nation reports that the building located at Oba Oniru by Ave Maria Hospital, Lekki, which was under construction collapsed around 3:30 am on Sunday trapping at least six artisans.

While two of the trapped persons, including a worker who raised the alarm to save other occupants, were confirmed dead on Sunday, rescuers remained resolute in the search of others despite not seeing them at the time the excavation exercise got to ground zero.

About 30 persons were said to have jumped to safety before the building which started collapsing from the penthouse, completely caved in.

According to Farinloye, the first body to be recovered on Monday was an elderly man, adding that all the others were also men.

He said: “The agency and other first responders have been working for over 24 hours at the above seven-storey building which collapsed yesterday.

“Four more bodies have been extricated from the rubble bringing the fatalities to six. The painstaking process is ongoing.