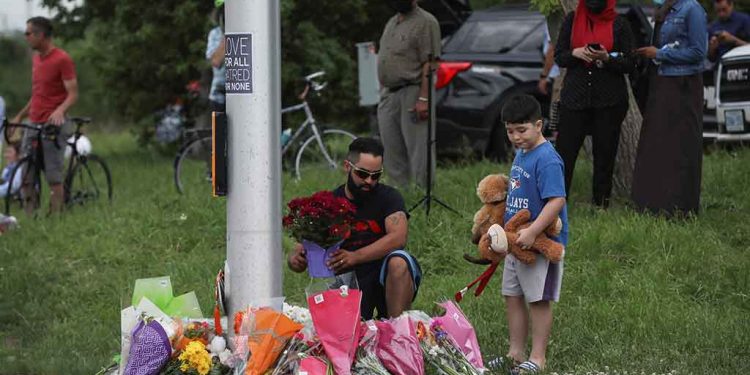 Four members of a Muslim family were killed in a “premeditated” vehicle attack on Sunday, Canadian police say.

The attack took place in the city of London, Ontario province. A boy aged nine, the family’s only survivor, is in hospital with serious injuries.

A 20-year-old Canadian man has been charged with four counts of murder and one count of attempted murder.

The attack was the worst against Canadian Muslims since six people were killed in a Quebec City mosque in 2017.

“It is believed that these victims were targeted because they were Muslim,” Det Supt Paul Waight told a news conference on Monday.

Police are weighing possible terrorism charges, he said, adding that it is believed to be a hate crime.

What are the details?

The victims were two women – aged 74 and 44 – a 46-year-old man and a 15-year-old girl. They have not been named, in accordance with the wishes of the family. A nine-year-old boy was in hospital with serious but non-life-threatening injuries, said police.

Police named the alleged attacker as Nathanial Veltman, 20, of London, Ontario. He was arrested without incident at a shopping centre about 6km (4.8 miles) from the crime scene.

It is not yet known if the suspect has ties to any hate groups, said Det Supt Waight.

“There is no known previous connection between the suspect and the victims,” Det Supt Waight said, adding that the suspect was wearing a vest that appeared to be “like body armour”.

Officials added that there was good weather and high visibility conditions when the black truck was seen mounting the kerb on Hyde Park Road at around 20:40 local time on Sunday.

One witness told CTV News she had to shield her young daughter’s eyes from the bodies.

Another witness told CTV the scene was “just chaos”.

“There were people everywhere and running,” said Paige Martin. “Citizens were trying to direct the emergency vehicles where to go. There was a lot of pointing and screaming and arm waving.”

A 2016 census found that London – a city about 200km (125 miles) south-west of Toronto – is growing increasingly diverse. One in five people was born outside of Canada, with Arabs being the area’s largest minority group, and South Asians coming in a close second.

Ontario Premier Doug Ford was among those who paid tribute to the victims, tweeting: “Hate and Islamophobia have NO place in Ontario.”

Canadian Prime Minister Justin Trudeau tweeted that he was “horrified” by the news.

“To the loved ones of those who were terrorised by yesterday’s act of hatred, we are here for you,” he wrote.

Hate and Islamophobia have NO place in Ontario. Justice must be served for the horrific act of hatred that took place in London, Ontario yesterday.

My thoughts and prayers are with the families and friends during this difficult time. These heinous acts of violence must stop.— Doug Ford (@fordnation) June 7, 2021

I’m horrified by the news from London, Ontario. To the loved ones of those who were terrorized by yesterday’s act of hatred, we are here for you. We are also here for the child who remains in hospital – our hearts go out to you, and you will be in our thoughts as you recover.— Justin Trudeau (@JustinTrudeau) June 7, 2021

“This was an act of mass murder, perpetrated against Muslims, against Londoners, and rooted in unspeakable hatred,” said London Mayor Ed Holder.

In a statement, Mayor Holder said he was speaking “on behalf of all Londoners when I say our hearts are broken”.

“We grieve for the family, three generations of whom are now deceased.”

The mayor’s statement added that he had ordered flags outside London City Hall to be lowered for three days of mourning.

The National Council of Canadian Muslims (NCCM) said in a statement that the attacker should face terrorism charges.

“A man allegedly got in his car, saw a Muslim family walking down the street, and made the decision that they do not deserve to live,” said the organisation’s CEO Mustafa Farooq.

“He did not know them. This is a terrorist attack on Canadian soil, and should be treated as such,” his statement continued.

Nawaz Tahir, a London lawyer and representative of the Muslim community, said during the police news conference: “These were innocent human beings who were killed simply because they were Muslim.”

“Hate will never overshadow the light of love.”

It is not the first time members of the Muslim community in Canada have come under attack.

In January 2017, a Canadian man fatally shot six worshippers at the Quebec Islamic Cultural Centre, and seriously injured five others. The perpetrator was sentenced to life in prison.

Canada’s deadliest vehicle-ramming attack happened in 2018, when a self-described “incel” (involuntary celibate) ploughed his van into a group of pedestrians in Toronto, killing 10 people.

Donald Trump calls Bitcoin 'a scam against the dollar'