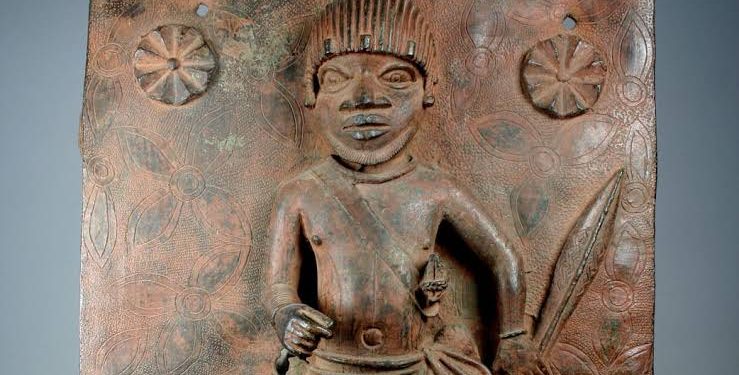 The New York’s Metropolitan Museum of Art, on Monday, has returned three works of art looted in the 19th century to Nigeria.

The museum and the Nigerian National Commission for Museums and Monuments (NCMM) also entered into an agreement to collaborate on mutual loans of Benin objects and other “exchanges of expertise and art.”

The two 16th-century brass plaques and a 14th-century brass head from the Kingdom of Benin — part of modern-day Nigeria — were taken from the Nigerian Royal Palace during British military occupation in 1897, and moved to the British Museum in London until 1950 when the UK repatriated them.

After their return to the National Museum in Lagos, they re-entered the art market and ended up in the hands of a private investor who donated them to the Met in 1991, where they were exhibited for years.

In June, the museum announced the return of the two 16th-century brass plaques in its collection. “Warrior Chief” and “Junior Court Official” belong to the group of highly contested objects known as the Benin Bronzes.

Their transfer to the Nigerian National Collections — already announced in June — was confirmed at a signing in New York by Met director Max Hollein and Abba Isa Tijani, Director-General of the National Commission for Museums and Monuments of Nigeria.

The bulk of the artefacts, which include brass and bronze sculptures as well as ivory carvings and number in the thousands, currently reside in European institutions, some of which have launched efforts in recent years to facilitate their restitution.

Speaking at the event, Prof. Abba Isa Tijani, director general of the NCMM, said: “If other museums can do what the Met did, I think we would be able to give confidence to our audience, to our visitors.”

He said: “The issue of repatriation is now at the heart of the people. People are looking at museums, particularly in Europe, and saying: these artifacts are not legally owned, are not their own. Yet they display these objects and take all the credit.”

In addition to the plaques, the Met helped broker the return of a third object that was not in its collection, a 14th-century brass “Ife Head” from the Wunmonije Compound in Nigeria that it had been offered for purchase. All three works were researched in partnership with the British Museum, which owns over 900 objects from the Kingdom of Benin.

The Met said it would “lend works from Benin” to Nigerian museums and, in return, Abuja would provide “loans” to the Met with a view to the creation of a new museum wing by 2024.

The Met currently houses approximately 160 objects from Benin City, most of them donated in the 1970s and ’90s by individuals who acquired them on the art market under uncertain circumstances. Like many of the Benin items in its collections, Klaus and Amelia Perls gifted the two brass plaques.