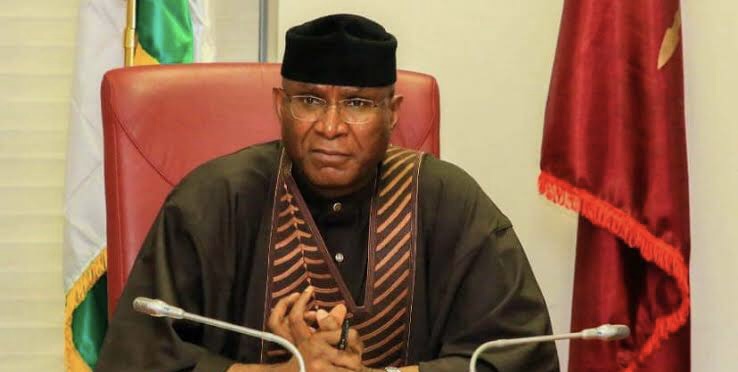 The Deputy Senate President and Delta APC Governorship candidate, Senator Ovie Omo-Agege has again accused the Ifeanyi Okowa-led administration of squandering N2.8 trillion in Federal Allocation and 13% Derivation in the last seven years, with next to nothing to show.

This is even as he expressed concern over years of injustice meted out to oil-bearing communities in the state, which bear the brunt of oil prospecting in the state.

Senator Omo-Agege who spoke in Otor-Owhe, Delta State, on Wednesday, when he visited traditional rulers in Isoko land to intimate them of his governorship aspiration, promised to complete the Ughelli/Asaba Road when elected governor.

The event which held at the palace of Odiologbo Okpuzo Romanus Inana, at Otor-Owhe Kingdom, Isoko North Local Government Area of the state, was graced by royal fathers from the 19 Isoko clans including the Odio-Ologbo of Oleh Kingdom and Chairman, Isoko Traditional Council of Traditional Rulers, Anthony Ovrawah, Omogha I, amongst others.

He said: “I know the pains of the Isoko people. The only major road that connects the Isoko nation to Ughelli and Asaba is in a deplorable condition. It’s a road that has been under construction right from the time of Governor Ibori, through the time of Governor Uduaghan and now to Okowa and the road is still not completed. And we know that roads of about the same kilometres are being constructed within the space of one year by Julius Berger in Akwa Ibom State.

“If you ask them, they give you an excuse that it is a federal road. I am here to commit to Your Majesties that when I become governor, I will use the resources of Delta State Government to complete it. And thereafter apply to Federal Government to give us refund. If they give us refund, we are happy. If they don’t, it is still okay. After all the road is being used by people from Delta State.”

The Delta Central lawmaker decried the neglect of the Isoko people despite being the goose that lays the golden egg.

He accused the Ifeanyi Okowa-led administration of squandering N2.8 trillion in Federal Allocation and 13% Derivation in the last seven years.

“In the last seven and half years, this state has received close to N2.8 trillion by way of Federal Allocation and Derivation from the Federal Government.  There is nothing on ground that is commensurate with what has been received. I am determined if given the opportunity to change this narrative. We are determined to create the enabling environment for jobs and empowerment,” he said.

Speaking on behalf of the royal fathers, the Odiologbo of Otor-Owhe Kingdom, Okpuzo Inana, decried the deplorable state of roads in Isoko land.

He commended the lawmaker for his contribution to nation building through quality representation and called for a review of 13 percent Derivation in favour of host communities.

“You talked about the state of the road from Ughelli to Ozoro and Kwale. That is the summary of the dividends of democracy the Isoko people are enjoying.

“The Isoko people will give you the required support. We will continue to pray for you very fervently. We watch you at the National Assembly. I believe nobody will deny the fact that you are representing your constituency well,” he said.

The royal blessings and prayers were offered by the Ovie of Oleh Kingdom, Anthony Ovrawah, Omagha 1, who wished him success in his political ambition.