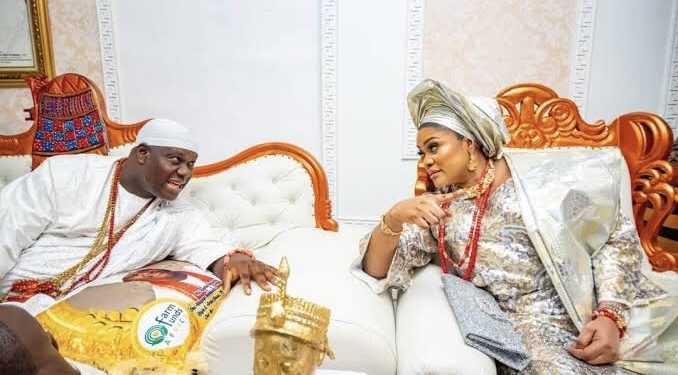 There were credible rumours for some months that the Ooni of Ife has married a new wife.

It was gathered that his new wife was welcomed to his palace on Tuesday night.

The new olori is said to be an oil and gas executive. According to reports, arrangements started in March when Ooni sent a high-powered delegation to her family to request her hand in marriage.

This is coming after the collapse of his marriage with Silekunola Naomi in December 2021.

The bride, Mariam, is in her mid-30s. She is a top management executive (Administrative Manager) of Nestoil Limited; Nigeria’s largest indigenous Engineering, Procurement, Construction and Commissioning (EPCC) Company in the oil and gas sector.

Mariam is from the prominent Anako family of Kogi State. Her mother, a retired police boss, is an active politician. She lost her dad at a young age and was brought up in the home of the former IGP Mohammed Dikko Abubakar who reigned as the boss of the Nigerian Police between (2012 to 2014). MD Abubakar as he is known, is the in-law of Africa’s wealthiest man, Alhaji Aliko Dangote.