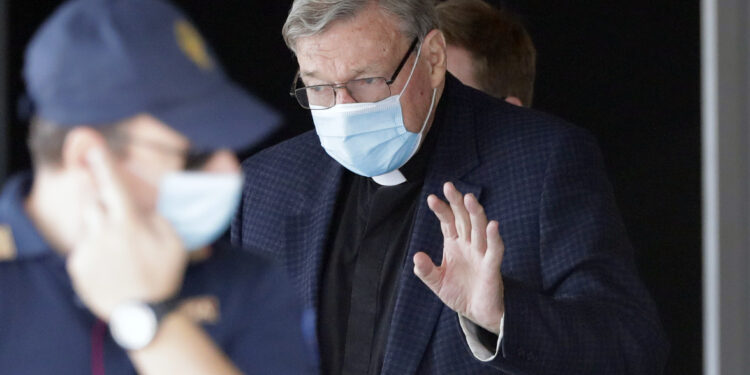 Australian Cardinal George Pell waves as he arrives at Rome's international airport in Fiumicino, Wednesday, Sept. 30, 2020. Pell took a leave of absence from his job in 2017 to stand trial in his native Australia on historic child sexual abuse charges, for which he was ultimately acquitted. (AP Photo/Andrew Medichini)

Pope Francis met with Cardinal George Pell at the Vatican on Monday in their first meeting since Pell’s return to Rome late last month following his acquittal on child sex abuse charges in his native Australia.The Vatican did not provide any details on what the two men discussed.

Pell arrived at Rome’s Fiumicino airport from Sydney on September 30. A source told CNN they did not know his official reason for for going nor how long he planned to stay there.

Pell served at the Vatican from 2014-2019 as Minister of Economy, in charge of Pope Francis’ financial reforms, which largely stalled when he was called back to Australia to defend his name.

In 2018, Pell became the most senior Catholic official to be convicted of child sex abuse. He served 13 months in prison before Australia’s High Court acquitted him in April 2020 of charges involving two choir boys in the late 1990s when he was archbishop of Melbourne.

Vatican experts say it is unlikely that Pell will return to his previous position given that next year he turns 80 years old.

Pell still maintains an apartment in the Vatican and in an April interview with Australian columnist Andrew Bolt, Pell said he would return to Rome eventually to collect his belongings but that he intended to live in Sydney.