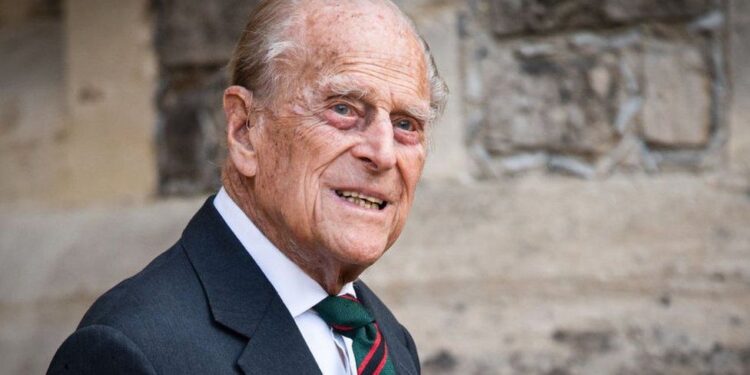 Prince Philip, the late husband to the UK’s Queen Elizabeth II, will be laid to rest on Saturday next week, in a ceremony that will be colorful and steeped in tradition, but low key by royal standards.

Philip, who was officially the Duke of Edinburgh, died peacefully at Windsor Castle on Friday morning at the age of 99. He was the nation’s longest-serving consort — a term given to the spouse of a reigning monarch — and they had been married for 73 years.

Harry, the Duke of Sussex, will attend his grandfather’s funeral, but his wife, Meghan, the Duchess of Sussex, won’t be present, a Buckingham Palace spokesperson said. The couple are living in California and a doctor had advised the duchess, who is pregnant, against traveling to the UK, the spokesperson said.

The couple gave an explosive interview with Oprah Winfrey that aired in March, in which they told their side of the story in their rift with the royal family, making explosive allegations against some of its members and the establishment.

Philip’s long-standing funeral plans had been adapted to respect certain Covid-19 restrictions, with all the usual elements that involve contact with the public removed. The College of Arms, which oversees many ceremonial aspects of the royal family’s work, had earlier confirmed the duke would not lie in state anywhere accessible to the public, which could have seen thousands of people lining up to view his coffin.

Current Covid rules in England limit the number of people who can attend funerals to 30.In a nod to the duke’s preference for driving himself, without a chauffeur, his coffin will be carried by a Land Rover from Windsor Castle to St. George’s Chapel, for the ceremony.

The procession will begin at 2:45 p.m. (9:45 a.m. ET) and will be led from Windsor Castle by a band of grenadier guards, along with several heads of military units. A Royal Navy piping party will pipe “The Still” whilst the Land Rover is stationed at the foot of the West Steps. There will be a gun salute and a national minute’s silence at 3 p.m. ahead of the ceremony.

The duke’s death has been marked in a somber fashion, as the royal household and UK government have asked the public not to gather or leave flowers at royal residences, with the country still under strict Covid-19 restrictions. 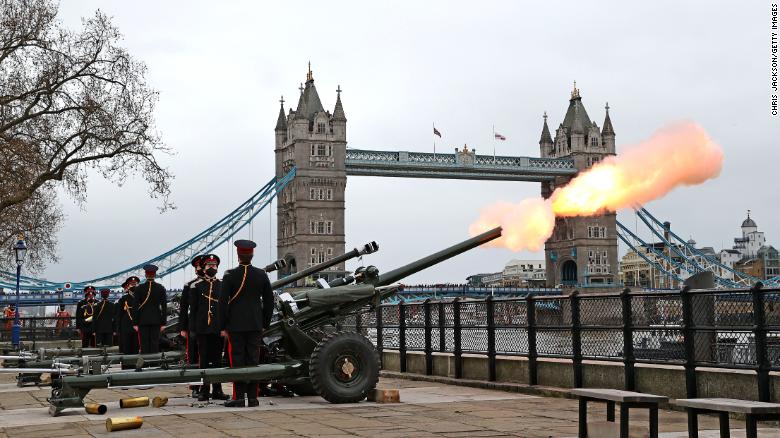 The Honourable Artillery Company fire a gun salute near London’s Tower Bridge on April 10But gun salutes were held across the nation, as batteries fired 41 rounds, at one round per minute, at Windsor Castle, the Tower of London in the capital and at Edinburgh Castle in Scotland, among other locations.

Australia, a Commonwealth nation, also paid its respects with a gun salute outside Parliament House in the capital, Canberra, on Saturday morning.

Tributes have flooded in from the UK and abroad for the duke, who had recently spent a month in two London hospitals

Paying tribute in a televised statement, UK Prime Minister Boris Johnson said the duke had “earned the affection of generations here in the United Kingdom, across the Commonwealth, and around the world” and had lived by an ethic of service.

“Like the expert carriage driver that he was, he helped to steer the royal family and the monarchy so that it remains the institution indisputably vital to the balance of our national path. He was an environmentalist, and a champion of the natural world, long before it was fashionable,” Johnson said.

But the duke was also a controversial figure. For many Britons, his defining characteristic was not his public service but his off-the-cuff and often offensive comments, including some that were undeniably racist.

The BBC said Friday it was receiving complaints about too much air time dedicated to the duke’s death, after the public broadcaster canceled hours of its usual programming to make way for wall-to-wall coverage of Philip’s life and death.

The BBC set up a dedicated feedback form within hours of the news from Buckingham Palace because of the high volume of complaints.

The special coverage had meant some of the UK’s most-watched shows, including soap opera EastEnders and the final of cooking competition MasterChef, were taken off air. 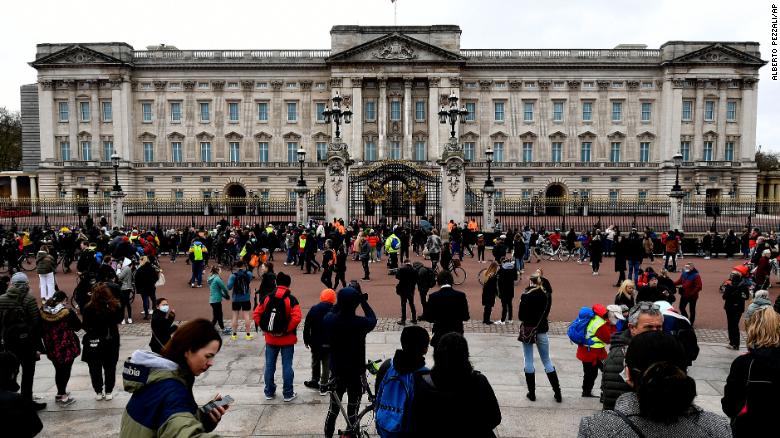 People gather outside the gates of Buckingham Palace in London on Saturday.

But the nation is officially in eight days of mourning, as was announced on Friday, and there will be other tributes to the duke in public life.

Players in the English Premier League will wear black armbands, and “there will be a minute’s silence before kick-off at all Premier League matches … across the weekend,” the organization has announced. 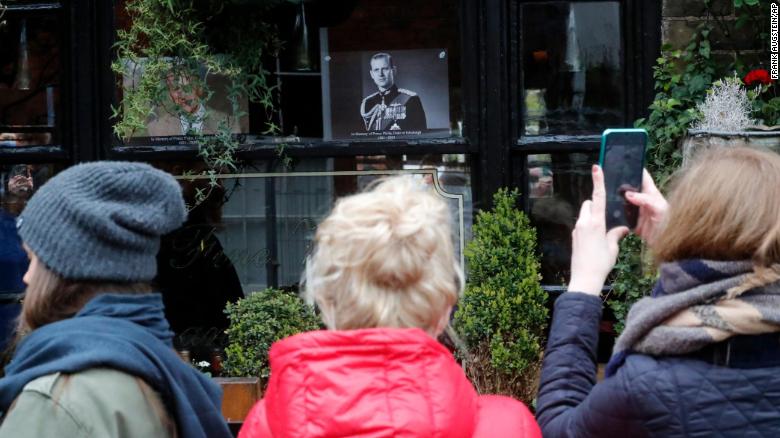 People take cellphone photos of a portrait of Prince Philip in a pub window near Windsor Castle on Saturday.

An online book of condolence was launched on the royal family’s official website, as they joined the British government in asking that “members of the public consider making a donation to a charity instead of leaving floral tributes in memory of the Duke of Edinburgh.”

The bells of London’s Westminster Abbey, where Prince Philip married Queen Elizabeth more than 70 years ago, rang 99 times on Friday evening in his honor, while the British flag — the Union Jack — is flying at half-staff on government buildings.

Tributes to a life of service

Harry and Meghan said his grandfather would be “greatly missed” in a statement following news of his death.Posted on the front page of the couple’s Archewell charity website, the message simply reads: “In loving memory of His Royal Highness The Duke of Edinburgh, 1921-2021. Thank you for your service … you will be greatly missed.” 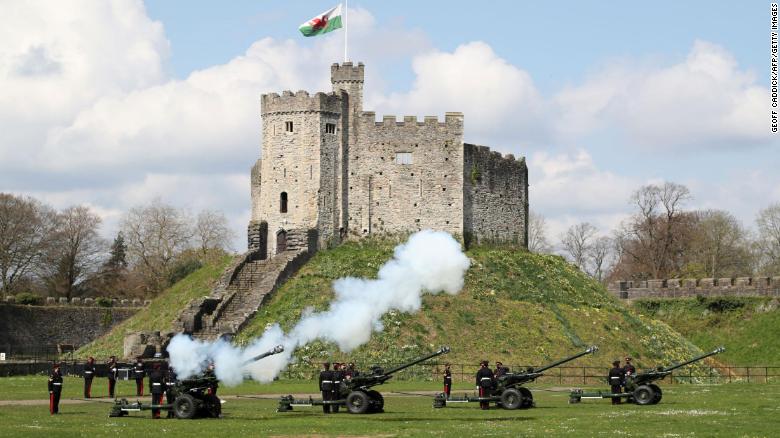 The Death Gun Salute is fired by the 104th Regiment Royal Artillery at Cardiff Castle, in Wales on April 10.

Former Prime Minister Tony Blair said the “whole nation will be united in sadness at the passing of Prince Philip,” adding he should be recognized “as a remarkable and steadfast support to the Queen over so many years” but also “celebrated in his own right as a man of foresight, determination and courage.”

Tributes for the duke also flooded in from all over the world, including the Commonwealth nations of India, Australia and Canada. Indian Prime Minister Narendra Modi said he had had a “distinguished career in the military and was at the forefront of many community service initiatives. May his soul rest in peace.”

Australia’s Prime Minister Scott Morrison said Philip “embodied a generation that we will never see again.” Canada’s Justin Trudeau said: “Prince Philip was a man of great purpose and conviction, who was motivated by a sense of duty to others. He will be fondly remembered as a constant in the life of our Queen.”

US President Joe Biden said Philip had “gladly dedicated himself to the people of the UK, the Commonwealth, and to his family,” and that his legacy would live on “not only through his family, but in all the charitable endeavors he shaped.”

Together, they had four children — Charles, Anne, Andrew and Edward — eight grandchildren and 10 great-grandchildren.

When Elizabeth ascended the throne in February 1952, on the death of her father, George VI, Philip’s lifetime of service as royal consort began.

Over the decades, Philip often accompanied the Queen on royal engagements, and conducted thousands of his own solo appearances.

He once referred to himself as “the world’s most experienced plaque unveiler,” while the Queen lauded him as her “constant strength and guide.”

Philip continued making public appearances well into his 90s, retiring only in August 2017.He was seen in public only infrequently from that point, notably at the Windsor Castle wedding of Prince Harry and Meghan Markle in May 2018, and at the nuptials for Princess Eugenie in October 2018 and for Princess Beatrice in July 2020.