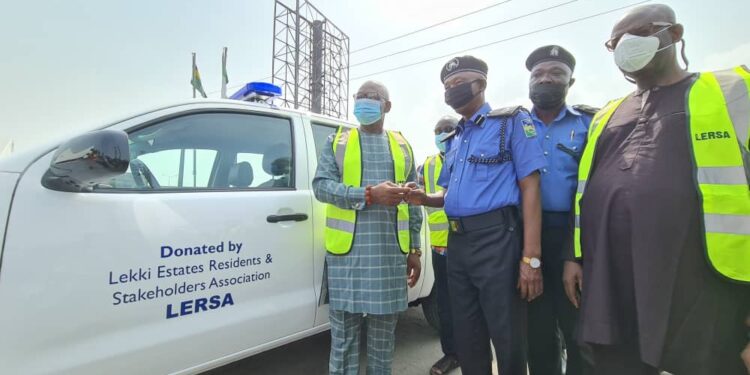 Members of the Lekki Estate Residents and Stakeholders Association (LERSA) have donated a patrol van to the Area J Police Command in the Ajah axis of Lagos.

The gesture, according to the association, was to show support to the police division and strengthen its capability for curbing violent crimes and other social vices in the area.

The Ajah division was one of the numerous police stations burnt by hoodlums during the #EndSARS protests in Lagos last October. Police vehicles, as well as other properties were set ablaze during the attacks.

Speaking at the weekend during the donation at the premises of the burnt Ajah Divisional Police headquarters, president of LERSA, Olorogun James Emadoye, who presented the keys to the Area Commander, Gbolahun Olugbemi, said Ajiwe and other police stations around the Lekki corridor were highly affected by the #EndSARS vandalisation that followed the Lekki tollgate shooting, which made the community pull resources to help the police.

The items donated include a Toyota Hilux, temporary tents, chairs and a generating set.

While appreciating the gesture, ACP Gbolahun said the donation had made the force understand the importance of community support and it was committed to defending the people.

Speaking on the attack, he said: “It was not as if we cannot defend our properties, but we thought of our corporate image and what members of the community would say. Imagine after the protest and community members see dead bodies outside the station, what would be the reaction towards the police?”