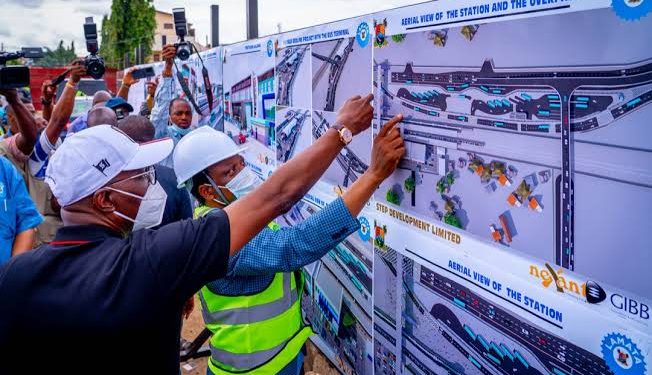 Lagos State Governor, Babajide Sanwo-Olu, over the weekend, promised that Lagos blue and red rail lines would commence operation between the last quarter of 2022 and first quarter of 2023.

The Governor, who disclosed this, after inspecting the on-going blue and red line projects, said his administration is committed to realising the rail projects in the last two years.

He said work has commenced extensively on the red rail line at the Ikeja iconic station, which is the meeting point of the project, adding that the construction work has really progressed in Ikeja, the biggest station outside the Marina station.

It would be recalled that the blue line from Okokomaiko in Lagos West on Lagos-Badagry Expressway after Lagos State University (LASU) is to come from Okokomaiko to Mile 2 through Orile, elevated to pass the National Arts Theatre, then sea crossing and finally end up in Marina was started by Babatunde Fashola’s administration in 2010, while the Red Rail Line, which is on Lagos Central District into Lagos West, was conceived by Sanwo-Olu-led administration.

The governor said construction work is going on as scheduled, and that the iconic Marina Station is unique, because it is an elevated station for multipurpose to harbour bus station and ferry services.

He said: “They have started the decking. There is also a pedestrian walk for people with disabilities. Underneath, there will be a bus station for BRT for First and the Last lines buses. There is also ferry services adjourning the Marina Station, which will move up to the State House. That is the summary of the massive architecture that is going on.

“We are excited because we can see the number of Nigerians that are working here. I think here in Marina alone, we have over 1000 workers. Part of the things we have been telling our contractors is that we need to have proper skill transfer.

“So, we will be working with LASU, University of Lagos and Yaba College of Technology, where we will be having engineering students that will have a feel of what rail construction is all about. They will come and see the bridge, road and rail construction as a learning tool, so that they can see how these are being done. Thus, our contractors can take them as interns. There are few hiccups, but we believe we will surmount them. Therefore, we are still on track. Last quarter of 2022, by the grace of God or first quarter 2023, you begin to see your trains moving on these two corridors.”