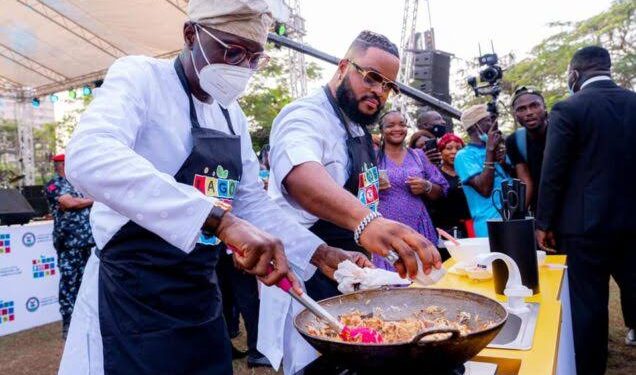 The maiden edition of the event was kicked off on Sunday with an unfamiliar chef – Governor Babajide Sanwo-Olu at the Justice Muri Okunola Park, Victoria Island, Lagos.

Clad in a black apron, Sanwo-Olu set up the symbolic outdoor kitchen and prepared stir fried rice, the official meal of the occasion, in the full glare of the public.

Sanwo-Olu assisted Whitemoney to deliver the Lagos delicacy made from onion, smoked fish, mixed granules of bonga fish and crayfish, pepper and seasoning.

The audience roared in excitement, as the Governor and Whitemoney served the hot meal to sensory panellists who confirmed the quality of the cuisine.

This marked the beginning of the event organised by the Ministry of Agriculture.

The initiative, formerly known as Seafood Festival, is a yearly event hosted by the State Government to exhibit local delicacies and agricultural commodities produced in Lagos for the international market.

After declaring the event open, Sanwo-Olu moved round to have one-on-one engagements with tradesmen who brought their products for exhibition.

There were more than 300 different foods, drinks, aqua products and agricultural commodities exhibited at the event.

There was also a variety of games for children on the field.

The Governor encouraged the sellers to take advantage of the Lagos State Employment Trust Fund (LSETF) to grow their businesses, noting that part of the event’s objectives was to boost the entrepreneurial spirit of the residents.

Sanwo-Olu said the administration remained committed to promoting the growth of Micro Small and Medium Enterprises (MSMEs), adding that his Government continually carried out reforms to ensure ease of doing business in Lagos.