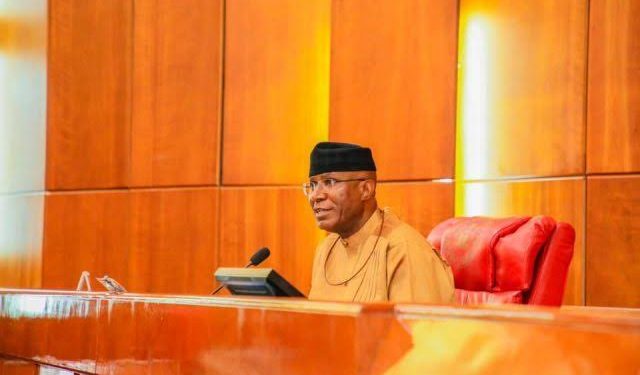 Deputy Senate President Omo-Agege and other South-south senators yesterday kicked against a bill seeking the inclusion of newly recognized oil-producing states as members of the Niger Delta Development Commission (NDDC).

Lagos, Ogun, Bauchi, and Anambra are some of the states now considered oil-producing states.

The objection by Senators Omo-Agege, George Sekibo, and Matthew Urhoghide   followed the consideration of a bill titled: “A Bill for an Act to  amend the Niger Delta Development Commission (NDDC) Act No. 6, 2000 and for other matters connected therewith, 2021.”

The bill was sponsored by the senator representing Lagos West District, Solomon Adeola.  The bill was passed for Second Reading by the Senate.

Adeola had in his lead debate argued that Lagos, Bauchi, and Ogun have officially joined the league of oil-producing states, following the discovery of crude oil in Alkaleri, Badagry, Lagos, and Ipokia, respectively.

He said: “By virtue of this, the states are entitled to the 13 percent derivation that is due to oil-producing states according to the provision of Section 162, Sub-Section 2 of the Nigerian Constitution.

“The purport of this bill is for the Act to make provision for new states who have joined the league of oil-producing states in Nigeria and for states that might eventually discover oil in the future as opposed to the present position of the Act, which only covers oil-producing states within the Niger Delta.

“Furthermore, the inclusion of the new oil-producing states in the proposed law will save costs since it will follow precedence.

However, the Deputy Senate President, Sekibo and  Urhoghide said the NDDC was created to address the environmental degradation caused by oil exploration in the Niger Delta.

Although the South-south lawmakers said they had no issues in the “new oil producers” benefitting from the 13 percent derivation, they were opposed to making them  NDDC member states.

He said: “We look forward to the day when indeed, all states in Nigeria will not only produce oil, but produce one form of mineral resource or the other.

“Dealing with the issue of 13 percent derivation, to us, that is not an issue to the extent that they produce oil in commercial quantity and the DPR (Department of Petroleum Resources) so determines, that oil is being sold, and revenue is being sent to the Federation Account.

“That is not the issue yet. The issue is whether or not just because they are oil-producing they should come under NDDC. If you are looking for meddlesome interlopers, you don’t have to go too far to find one.

“What this lead debate clearly shows is that my colleague from Lagos is a classic meddlesome interloper.

“The NDDC  is a regional development commission.  We must draw a distinction between the NDDC and the oil and mineral producing commission.”

Sekibo  congratulated  the  ”states where my friend said they have discovered oil.”

He said: “What I don’t know is that whether the oil is in commercial quantity and they are drilling them out for sales and the money going to Nigerian coffers. He has not expatiated on that one.

“Are they exploring oil, are they refining oil in these places, and has the oil caused any devastation in that environment?

“The purpose of the NDDC is not just because they found oil there. It is because the place has been so devastated and there is the need to see how they can remedy the place and because that place is so backward.

“Each time there is a law to support people who are suffering, Nigerians will come out after a couple of years to dampen the strength of that law.

“There is nothing wrong that they are given their 13 percent derivation, that is if funds from that oil are now in the Federation Account.”

Urhoghide said states outside the Niger Delta were free to share from the 13 percent derivation provided they produce oil in commercial quantity. He argued that including them as NDDC members was out of place.

His words: “I’m not particularly against the sponsor of this bill. I just believe that the bill should be properly posited.

“Today, what each state gets from the 13 percent derivation is a function of production.

“Today, Gombe is fast becoming a host community, Bauchi and some other states. But, to say these states belong to the Niger Delta region is not possible.

“If the idea is that they want to share out of the 13 percent derivation, they are free as long as they produce oil, but to say they must belong to Niger Delta  makes a mockery of the creation of NDDC.”

Senators from the North, who contributed to the debate, supported the bill, but said the states outside of the Niger Delta should not be made part of NDDC.

The bill was referred to the Senate Committee on Niger Delta Affairs by Senate President Ahmad Lawan for further legislative work.  The committee will report back in four weeks.