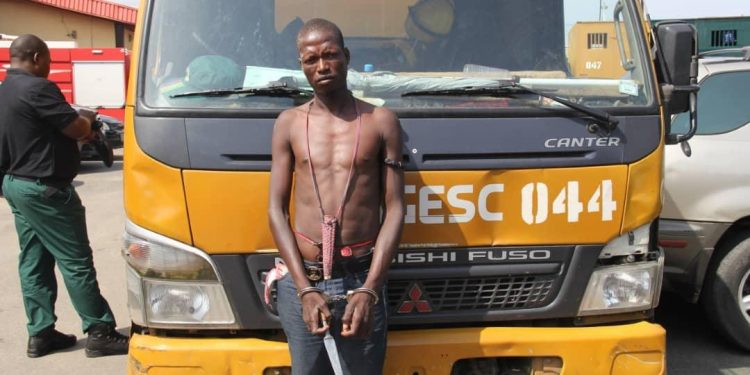 The 30-years-old hawker said to be hawking popcorn, upon sighting the Agency’s operatives brought out dangerous weapons such as knife (dagger) and charms to attack the operatives

The incident occurred at about 12.30pm, during the daily routine patrol by the officials in ensuring that the State is cleared of all forms of street trading.

It was gathered that the 30-years-old hawker said to be hawking popcorn, upon sighting the Agency’s operatives brought out dangerous weapons such as knife (dagger) and charms to attack the operatives.

It was also gathered that he was eventually overpowered and brought to the Agency’s Headquarter for subsequent investigation and prosecution.

Confirming the incident, LAGESC Corps Marsha, C.P Gbemisola Akinpelu (retd), condemned incessant attacks on its personnel saying they are out to dislodge street traders around the nooks and crannies of the State.

She said, “such attacks can inflict serious injuries or loss of lives to the officers who are out to ensure the directives of the state governor, Babajide Sanwo-Olu towards ensuring that our roads, walkways and road setbacks on major highways in the State are free of illegal trading activities and street hawking which mostly impedes free human and vehicular movements that often constitutes traffic gridlocks on our roads, “she said.

According to her, “the suspect has been arrested and handed over to the Police for further investigation and prosecution to serve as deterrent to others.” she added.