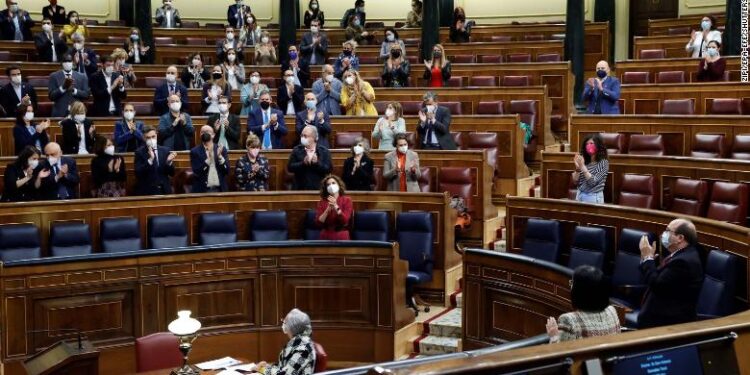 Spain passed a law permitting euthanasia on Thursday for people with serious, chronic illness, no chance of recovery and unbearable suffering.

Spain approved a law permitting euthanasia on Thursday by a 202 to 141 vote in parliament, making it the fourth European Union country to do so.

“Today, a majority of parliament has borne witness to people who are ill who have been clamoring for years for this right,” Socialist Party MP Maria Luisa Carcedo said during the final debate.

She cited the case of Ramon Sampedro, a paralyzed Spaniard who recorded his assisted suicide in 1998, a story later told in the Oscar-winning 2004 movie, “The Sea Inside.”

Spain’s euthanasia law permits people who have “serious, chronic illness with no chance of recovery and with unbearable suffering” to request assistance from a doctor to end their life, according to the bill posted on parliament’s website.

The law, due to take effect in three months, would stop the current potential jail terms for people who help another to end their life. Doctors will not be required to participate in ending a person’s life.

Belgium, Luxembourg and the Netherlands already allow euthanasia under certain conditions, Reuters reported. A Portuguese court this week struck down as unconstitutional a euthanasia law there, the Portuguese president’s office said.

The governing Socialist Party promoted the law and got support from smaller leftist and other parties. The two main conservative parties opposed it.

Thursday’s vote was the final step in becoming law.

‘A right, not an obligation’

MP Lourdes Mendez, of the far-right Vox party, told parliament: “You have elected death instead of medicine” and vowed an appeal to Spain’s Constitutional Court.

MP Jose Ignacio Echaniz, of the main opposition conservative Popular Party, told parliament, the new law would “provoke distrust between parents and children. Today, the weakest in society have reason to fear.”

But Spanish journalist Asun Gomez Bueno disagrees. She lost her husband, Luis de Marcos, in 2017 to multiple sclerosis, at age 50. He wanted assisted suicide or euthanasia and she has since become a leading advocate for the new law.

“The last four years of his life, (Luis) was totally paralyzed but kept his cognitive ability intact,” Gomez Bueno told CNN. “There was no treatment to mitigate his pain. The pain was so terrible he didn’t want to sleep at night because he knew the next day would worse.”

“I don’t want anybody else to go through the same hell he suffered,” Gomez Bueno said. “Euthanasia is a right that can only be requested by the person involved. It is a right, not an obligation.”