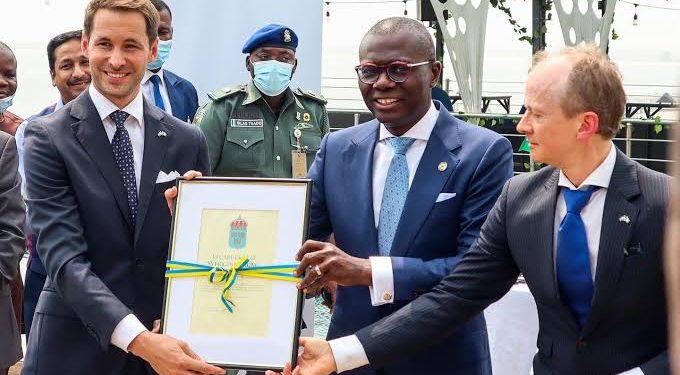 The Kingdom of Sweden has opened a new consulate in Lagos to broaden economic cooperation between Nigeria and the Nordic country.

The new Swedish Consulate was inaugurated on Thursday by Governor Babajide Sanwo-Olu at the Landmark Towers, Victoria Island, Lagos.

Speaking at the ceremony, Swedish Ambassador in Nigeria, Carl Michael Gräns, said that the consulate in Lagos would be a focal point for trade and socio-cultural activities for both countries.

Gräns emphasised that Sweden’s first embassy was opened in Nigeria on Oct. 1, 1961, adding that both countries had celebrated 60 years of diplomatic relations.

“Right now, we want to broaden our economic cooperation and that is one of the reasons this honorary consulate has been opened.

“We understand that the pandemic has done a lot of harm to businesses and relations but we desire to get closer and be a significant part of the economic recovery,” said the Swedish envoy.

He said that the new honorary consul would consult affairs for Swedish citizens and Nigerians on business issues as well as cultural promotion.

Akesson said that in the course of his 10 years in Nigeria, he fell in love with the entrepreneurial energy, warmth, economic culture and drive of Nigerians.

“There are many opportunities in Nigeria, particularly in Lagos, and I believe that the relationship between both countries will continue to be strengthened.

“I look forward to supporting our Swedish businesses and also supporting the embassy in Abuja as they work to improve upon ties, friendship and the promotion of trade between both nations,” Akesson said.

According to the governor, the presence of the mission in Lagos will further strengthen Swedish-Nigerian businesses leading to mutually beneficial economic, cultural and political results.

“It is exciting to know that the bilateral relations between Sweden and Nigeria span over sixty years. This speaks to our partnership and I appreciate the Swedish government for putting this together.

“A lot of businesses and sovereign nations in Nigeria recognise that while we have a thriving capital in Abuja, for them to be close to citizens, activate businesses, and initiate cultural activities, there is always a sense that they must have a footprint in Lagos.

“This partnership is not only about what Lagos stands for but also the benefits we all can derive from bilateral relations, and today, the Swedish government has done the most appropriate thing,” Sanwo-Olu said.