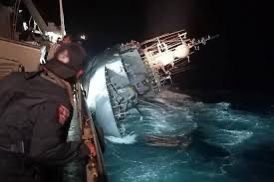 A Royal Thai Navy warship sank in severe weather early Monday, leaving 33 of its crew of 106 sailors missing in stormy seas in the Gulf of Thailand, Thai authorities said.

Three rescued sailors were in critical condition, and a search operation was underway for the missing crew, authorities said.

The electrical shutdown caused the ship’s main power systems to fail, leaving the crew unable to maneuver or pump out sea water that had entered its hull, it said.

Over the course of more than three hours, efforts to transfer pumps to the Sukhothai from other naval vessels responding to the incident failed, the statement said.

“At 00.12 am of Monday, the Sukhothai tiled even further and later sank,” it said.

The 960-ton Sukhothai was built in the United States and commissioned into the Thai navy in 1987.

Carl Schuster, a retired US Navy captain, said the Thai crew faced a difficult situation on such an old ship.

“Once you lose power, you are in the dark and doing everything with portable diesel pumps and buckets,” he said.

“For a small, (almost) 40-year-old ship in heavy seas, the odds are against success in that case.”

El Salvador has arrested 2% of its adult population in its war on gangs. Other countries are taking note