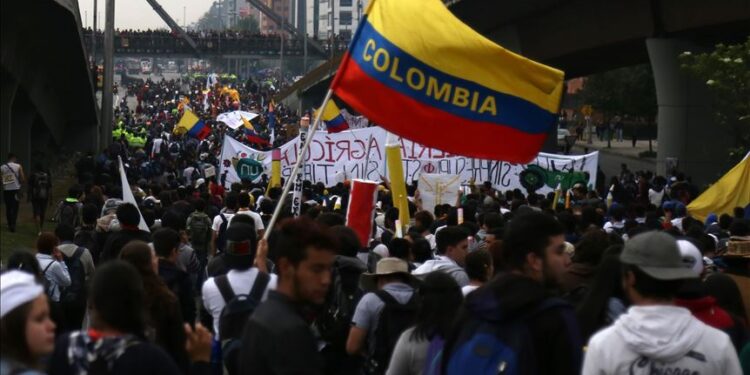 Strike went ahead despite calls for it to be postponed because of COVID-19, with riot police using tear gas to disperse the crowds.

Bogota, Colombia – Tens of thousands of protesters answered the call of Colombia’s biggest unions to take to the streets over the government’s proposed tax proposals despite a court order to postpone the strike over concerns of an overstretched health system amid a third wave of coronavirus.

Teachers, university students, trade unions, Afro-Colombian and Indigenous groups and many others took part in the protests on Wednesday against tax changes put forward by right-wing President Ivan Duque’s government.

The government has proposed an array of new or expanded taxes on citizens and business owners and also to reduce or eliminate many tax exemptions, such as those on product sales, to help boost an economy severely affected by COVID-19.

But many working- and middle-class people worry the new proposals will hit them too hard.

“We’re here to say ‘no’ to the tax reforms,” 36-year-old Spanish language teacher Sol Martinez told Al Jazeera while holding a sign with the same message written on it. “They’re robbing us poor people, while they give everything to the rich.”

Sol said if the government does not listen to their outrage, the strike will have to continue.

Attendance was high in large cities including Bogotá, Medellin and Cali as well as in other smaller cities around the Andean nation. Cali saw some violent clashes with police from early in the day when a group of Indigenous Misak people tore down a statue of the Spanish coloniser who founded the city.

Over several hours, police made several attempts to disperse people from the streets. There were loud explosions, police sirens and screaming crowds.

Laura Cortes, a 24-year-old recent university graduate, said she could not believe the Finance Minister Alberto Carrasquilla in charge of the tax reforms, did not know how much a dozen eggs costs. In a local media interview last week, he publicly undervalued them, causing further outrage.

Although the tax reform spiked protests, it is not the only reason people were protesting.

After a short period of calm after Colombia’s peace deal in 2016 which ended 50 years of violence between the Revolutionary Armed Forces of Colombia (FARC) rebel group and the government, the country’s security situation has regressed.

Many parts of Colombia still have little to no state presence and new armed groups have moved in to take control of illegal drug trafficking or illegal mining economies on land once controlled by the FARC. Many of these armed actors butt heads for territorial control and civilians get caught in the crossfire. Forced displacements have skyrocketed this year as a result.

The country’s ombudsman released a report on Wednesday showing that 27,000 people were forced from their homes in a total of 65 mass displacements between 1 January and March 31 this year. That represents a 96-percent increase in mass displacement compared with the first quarter of 2020.

Environmental and human rights activists continue to be killed and threatened, as well as demobilised FARC fighters. So far 271 former fighters have been killed since the peace deal was signed.

Amid crowds of people marching on Bogota’s streets, 55-year-old teacher Ivan Pulido caught his breath by the side of the road.

He refers to the Duque administration as a mafia, because he believes it has given his country away to big multinational companies and banks.

“With this tax proposal, they’re going to bleed the working class dry, the ones who it most affects,” he said, wearing a face mask with “Duque is not my president” printed on it.

“People are very unhappy about rising insecurity, the massacres, the killing of social leaders, basically the overall repression and the lack of separation in terms of the balance of power due to the friendships between the different institutions in Colombia. All of that is leading to a tremendous discontent of governing ability with Duque,” Gimena Sanchez, the Andres director of the Washington Office on Latin America, told Al Jazeera.

“Most of the Afro-Colombian, Indigenous and rural sectors are basically feeling that the government are trying to go back to policies that go against their interests and violate their rights, including things like aerial fumigation of coca which would be a very big blow to the peace process,” she said.

Political analyst Sergio Guzman says he does not believe the strikes will make a difference.

“I see that both the government and the protesters are sticking to their guns,” he said, adding that today’s national strike was a continuation of the big ones that happened in 2019 and that they are about growing inequalities, unfair distribution of wealth and tax burdens, coupled with frustrations that have been growing for some time.

“People feel the government is not listening to them. This includes the implementation of the peace agreement, some environmental issues, growing inequality, the fact the lockdowns have hurt the economy of low and medium class people disproportionately to how it’s affected the wealthy, and I think this is all coming to boil at a time when people are fed up and unfortunately it coincides with a third peak of COVID,” he said.

But many are hopeful the strike will force the government to make a change to the proposals.

Amid the protests on Wednesday, Vice Finance Minister Juan Alberto Londono lowered the amount of money it hopes to raise in taxes, in an effort to win enough support to push legislation through congress.

But like Pulido and many others on the streets, if the government does not listen, the protesters say the national strike must go on.

“If they don’t listen to us, things are going to get complicated for them. This government is losing credibility every day. Every day more people are rejecting it and elections are coming up next year.”