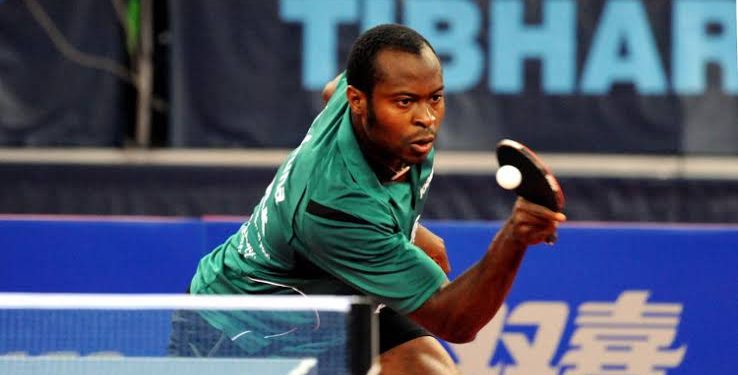 Aruna Quadri has been knocked out from table tennis men’s singles events at the Tokyo 2020 Olympics.

With his defeat, All Nigeria’s representatives in table tennis have been knocked out from the Olympics.

Other Team Nigeria’s representatives in table tennis who have been eliminated from the competition are Funke Oshonaike, Offiong Edem, and Olajide Omotayo.

Multiple Olympic Games participant Funke Oshonaike was sent packing from the Tokyo 2020 Games in the preliminary round.

The 45-year-old Oshonaike lost 1-4 to Juan Liu of the U.S in the women’s table tennis singles.

Oshonaike who has represented Nigeria at seven Olympic Games lost the first three sets to her opponent.

Also, Olajide Omotayo on Saturday in Tokyo crashed out of the men’s table tennis singles event of the ongoing 2020 Olympic Games.

Omotayo was humiliated with 0-4 defeat by Tiago Apolonia of Portugal.

Apolonia made light work of his performance as he thrashed Omotayo in four straight sets 11-7 11-9 11-6 11-5 in the preliminary round of the event.

The match played at the Tokyo Metropolitan Gym saw 24-year-old Edem, who is ranked number 121 in the world, take on a more experienced Zhang ranked 31 in the ITTF World rankings.

Edem had progressed to the second round after she thrashed her Hungarian opponent Dora Madarasz 4-1 in the preliminary round.

She won the toss to serve first in a best of seven second round game against Zhang and started off strong, taking the first four points, before finishing the set 15-13 after a long rally which included three game points.

However, a calmer Zhang slowly spinning the ball and moving around was able to dominate the next two sets 11-2, 11-2, only allowing four points between the second and third set combined.

It was a much tighter game in the fourth set as Offiong, a four-time Olympian, fought back well and came within just two points to tie the set.