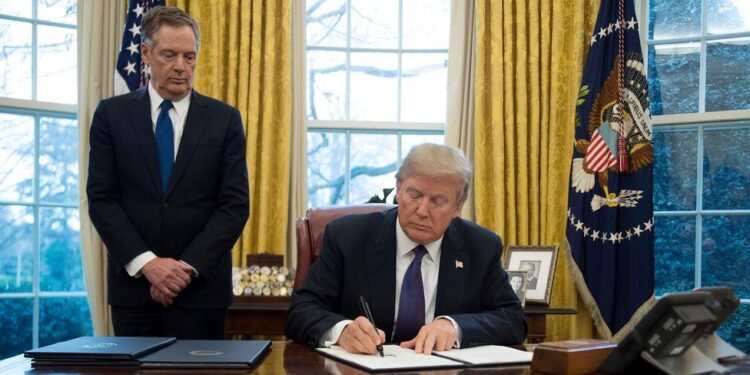 The US has suggested that the process to find a new Director-General of the World Trade Organization (WTO) needs to be reopened, in what would be an unprecedented move.

Donald Trump’s trade chief Robert Lighthizer told the BBC on Wednesday that the WTO needs “someone with real experience in trade”.

The US opposes former World Bank economist Ngozi Okonjo-Iweala for the job.

A consensus still hasn’t been reached.

The doubling down on the rejection of Ms Okonjo-Iweala, despite widespread support from other countries, escalates one of the most pressing global trade issues Joe Biden will have to solve as US President.

The other finalist for one of the top jobs in international trade is South Korea’s Trade Minister Yoo Myung-hee, and the pair have been left in limbo for more than five weeks.

President Trump’s top official on trade, US Trade Representative Robert Lighthizer’s remarks on Wednesday to the BBC in his first international interview confirm that there is no way the Trump administration will be persuaded to back the Nigerian ex-finance minister in its remaining weeks in office.

The impasse at the WTO comes at a sensitive time for global trade, which has suffered because of the coronavirus pandemic.

Ngozi Okonjo-Iweala insists she is the right person for the job and has the right experience with both trade and delivering reform. Her spokesperson told the BBC: “Dr Okonjo-Iweala looks forward to engaging with the Biden administration and is hopeful that final consensus can soon be reached. The WTO urgently needs to get to work at this time of global crisis.”

A new leader is seen as crucial for achieving meaningful change. Mr Lighthizer said the WTO “is massively in need of reform”, adding “we need to start making headway” on that process.

If a new Director-General is not appointed before Joe Biden’s inauguration as US President on 20 January, it is likely the process will be delayed for several months as a new US trade team is put in place.

That includes Katherine Tai, who has been picked to be Mr Lighthizer’s successor, but needs Congressional approval.

Mr Biden may also embark on a widespread review of US trade policy, as dozens of industry groups are urging him to do. But he has said he doesn’t plan to immediately remove any of the tariffs Mr Trump imposed on China, and which the WTO has judged to be “inconsistent” with international trade rules.

The WTO plays a crucial role in brokering trade deal and upholding international trade law, however it has been without a leader since Roberto Azevedo resigned in August, saying someone else would be better placed to deliver the needed reforms.

His tenure was blighted by the US China trade war and President Trump’s widespread use of tariffs to achieve his goals on trade.

According to Mr Lighthizer, the WTO has “failed to function as a negotiating body”. He also pinpoints that “massive reform” is needed for the dispute-resolving Appellate Body, which he feels has evolved into a body creating a common law of trade, “taking away benefits” that members had negotiated for “and putting restraint on things that had been conceded”.

The Appellate Body has been incapacitated by the Trump administration vetoing the appointment of new judges.

“I think there’s a consensus developing at the WTO that we need the appellate body reform,” he said.

“We need to start negotiating again, we need to start making headway. So I’m glad you brought up the WTO, it’s been clearly a focus for us and to us its an organisation that started off as a good idea and basically isn’t functioning very well, but I think that can be sorted out also.”

The Director-General has an important role to play in bringing change according to Professor James Bacchus, a former chairman of the WTO Appellate Body, as well as a former US trade negotiator.

Effective multilateral cooperation to lower barriers to trade is urgently needed to help jumpstart the global economy and recover from the pandemic,” he says. “That requires creative leadership from an honest broker in the role of director-general.”

Joe Biden hasn’t given any indication that he prefers either Ms Yoo or Ms Okonjo-Iweala for the WTO’s top job. However when it comes to trade, he recently said: “We need to be aligned with the other democracies.. so that we can set the rules of the road instead of having China and others dictate outcomes.”

“If the Biden administration can trade off support for Ngozi for political capital on other reforms, that certainly seems like a good idea,” Simon Lester, a WTO expert at the Cato Institute in Washington told the BBC.

He added that this would be the quickest way to get a new WTO leader in place, because “opening up the selection process could be messy and complicated, and would lead to delays”.