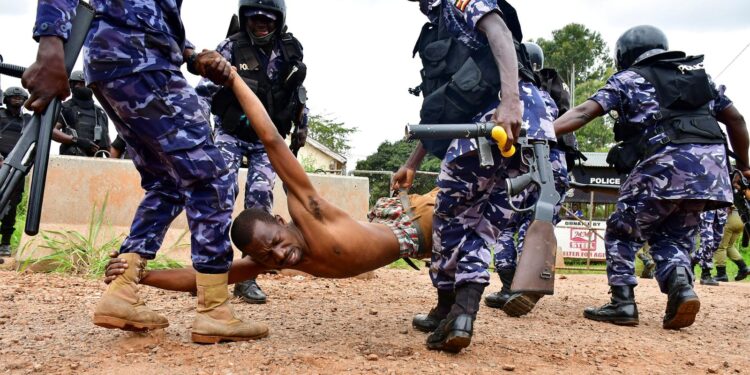 Police and soldiers have been using live bullets, water cannons and tear gas to disperse the protests.

The number of people killed in protests over the arrest of Ugandan presidential candidate Bobi Wine has risen to 37, according to Ugandan police.

Mr Wine – a pop star whose real name is Robert Kyagulanyi – was detained on Wednesday in the eastern town of Luuka after being accused of violating anti-coronavirus measures by holding mass rallies.

Youths have been burning tyres and blockading streets in the capital, Kampala, and in other areas, demanding Mr Wine’s release.

Police and soldiers have been using live bullets, water cannons and tear gas to disperse the protests. Troops have been seen carrying AK-47 assault rifles.

The protesters are accused of damaging vehicles, looting properties and throwing stones at security personnel in Uganda’s worst unrest in a decade.

The death toll is likely to rise, according to Kampala Metropolitan Police spokesman Patrick Onyango, who added that 350 people had been arrested and detained in the city.

Army spokeswoman Brigadier Flavia Byekwaso said the military had got involved because it was a “war-like situation” which the police could not handle on their own.

“These things are spontaneous on all streets, so police cannot handle such a situation.”

It added: “Only army and police officers have access to him. The violation of his rights with impunity must be condemned by all persons of good conscience.”

Mr Wine is campaigning to unseat President Yoweri Museveni – who has been in office for 34 years – in January’s election.

Mr Museveni, 76, is seeking a sixth term in office.