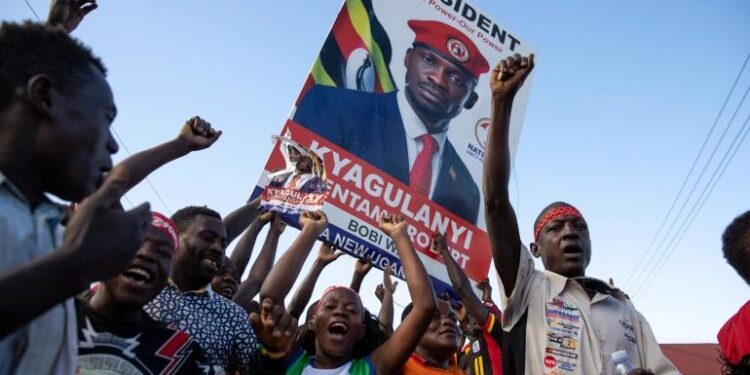 Bobi Wine won 35 percent of the votes cast, according to the electoral commission [EPA]

Court tells soldiers to cease surrounding the home of the opposition leader, whose house arrest has drawn condemnation.

A Ugandan court has ordered security forces to cease surrounding the home of opposition leader Bobi Wine, who has been under house arrest since the January 14 presidential election, his lawyer says.

Troops have blocked the 38-year-old pop star-turned-politician from leaving his house in a suburb of the capital Kampala since he voted in the January 14 election where he ran against long-serving incumbent President Yoweri Museveni.

Museveni, 76, who has been in power since 1986, was declared winner of the poll with 59 percent of votes versus 35 percent for Bobi Wine, who had for years denounced corruption and nepotism in his songs.

Ugandan authorities have said Bobi Wine can only leave his home on the outskirts of the capital under military escort because they fear his presence in public could incite rioting.

But the judge said in his ruling that Bobi Wine’s home is not a proper detention facility and noted that authorities should criminally charge him if he threatens public order.

Police spokesman Patrick Onyango said he had no immediate comment as the ruling had not been received.

US ambassador Natalie E Brown had tried to visit Bobi Wine at his home, drawing an accusation of meddling and subversion from the Ugandan government.