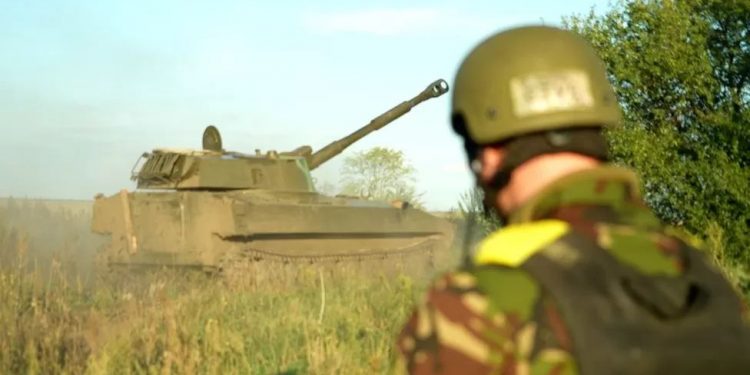 Ukraine’s progress in the southern regions of Kherson and Zaporizhzhia has been far more limited than its successes in the north-east. Front line positions come under regular fire as both Russia and Ukraine attempt to push forward. The BBC’s Abdujalil Abdurasulov gained rare access to the front line in Kherson, a region where Ukrainian men have been told they could be drafted to fight for the Russian army.

An old Soviet self-propelled howitzer called Gvozdika or “Carnation” is rolled out in an open field and put into position. Its barrel tilts up. “Fire!” comes the command.

The gunners hastily move away after the last shot, acting quickly.

Although the advancement of Ukrainian forces in the south is very slow, their artillery units remain busy.

Stus, commander of the gunners, explains that the Russians target his infantry and they respond in order to silence them.

Their job is very much felt at the front line. Soldiers walk across the vast field under the cover of a line of trees. They pay no attention to the sound of missiles flying above their head nor the thud of explosions. The fighters say a Russian observation post is 500m away and they might be within the range of small arms.

The Ukrainians move quickly to reach a destroyed farm building that they took back just a week ago. Now, they are digging trenches and carrying sandbags in order to fortify their new position.

But Ukraine’s advancement in the south is moving slowly.

All talk about counter-offensive here helps to deceive Russians and achieve gains in the East, laughs Vasyl, a deputy commander of the regiment.

“But we have some success here as well. We continue liberating villages with small steps but it’s very difficult – every victory we have is covered with blood,” he adds.

Many Ukrainians who remain behind the Russian front line, in the occupied territories, are anxiously waiting for this counter-offensive.

“We’re euphoric when Ukraine hits the occupied territories,” says Iryna, a resident of Melitopol in the south. “It means that Ukraine has not forgotten us. We all know that living near military infrastructure and buildings is not safe, so most civilians have moved out from those locations.”

But for people in the occupied territories, the longer they wait, the harder it is to survive. Many believed that the counter-offensive would happen in August. But when that didn’t happen, people started to flee towards Ukrainian controlled territories and areas further to the West.

Among them was Tatyana Kumok from Melitopol. The Israeli citizen was visiting her hometown when the Russian invasion started in February. She stayed in the city and distributed aid to residents but in September, she and her family decided to leave. One of the main reasons for leaving was Russia’s promise to hold a so-called referendum.

“As soon as it’s done, the Russians will introduce new bans according to their laws and try to legitimise the occupation,” she says.

With the city turned into a giant military base, she says it is clear that Russian troops won’t abandon the city easily.

“It was obvious the city won’t be liberated this fall,” she adds.

Even a silent resistance to Russian occupation is getting dangerous now.

In September many families were forced to send their children to Russian-administered schools even though their children would be exposed to the Kremlin’s propaganda.

“If you don’t send your child to school, it’s a litmus test for you – it means you have pro-Ukrainian views,” explains Ms Kumok. “I know parents who had to tell their seven-year-old child not to talk about things discussed at home with anyone at school. Otherwise the child could be taken away. That was really awful.”

The crackdown on people who do not support Russian rule is rising.

“There is a sharp increase of arrests since August following the successful Ukrainian air strikes,” says Bohdan who is still living in Kherson. He spoke with the BBC via a messenger app and his real name is not being revealed for his safety.

Bohdan says that earlier detentions were based on a list of names that the Russian military had. But now anyone can be arrested and thrown into a basement for interrogation.

Russian soldiers recently came to the house of Hanna (not her real name) in Nova-Kakhovka, a city in Kherson region, to check who was living there.

“They didn’t go inside the house but it was still scary. I don’t even walk with my phone now,” she said via a messenger app.

The self-styled referendum is bringing a new threat to the local population – mobilisation. Many men could be drafted to fight for the Russian army.

Russian soldiers are already going house to house in some villages and writing down the names of male residents, local residents say. They claim soldiers have told them to be ready for a call-up after the referendum.

Men aged 18-35 are reportedly not allowed to leave the occupied territories any more.

Iryna left on 23 September, the first day of the so-called referendum, with her husband and two children. They wanted to stay in order to look after her paralysed 92-year-old grandmother.

“But when Putin announced the call-up, and we already knew about the referendum, it was clear there would be a mass mobilization and men would be detained right on the street irrespective of their age,” she says.

“We could survive without gas and electricity, we could find solutions for that. But not for this. That was our red line,” says Iryna.

The Russian call-up will pose more challenges for the Ukrainian counter-offensive.

It will certainly escalate the war and more people will die, Ukrainian soldiers say.

“We shouldn’t underestimate our enemy,” says Stus, commander of the gunners. “Those new recruited Russian soldiers will have guns and grenades, so they will pose a threat, which we will have to eliminate”.

As the gunners wait for new tasks with their howitzer hidden in the bushes, Russian troops hit a nearby Ukrainian village with Grad missiles. The gunners are silent as they listen to the series of explosions.

That terrifying sound was just another reminder that the success of the Ukrainian troops will depend on how quickly they can make Russian artillery and rocket launchers go silent.