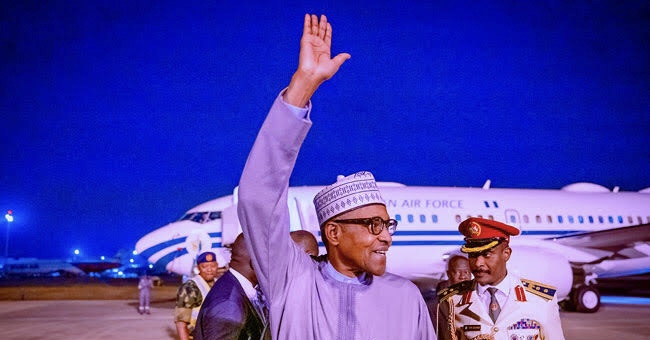 President Muhammadu Buhari has returned to Abuja on Sunday after a week-long visit to Washington DC, USA, where he attended the the US-Africa Leaders Summit.

The News Agency of Nigeria (NAN) reports that while in Washington, the Nigerian leader also participated actively at the US – Nigeria Business and Investment Forum.

The Business Roundtable was organised by the American Corporate Council on Africa (CCA) in conjunction with the Federal Ministry of Industry, Trade and Investment.

Speaking at the forum, Buhari said Nigeria remains the best destination for American investors to put their money.

He said  aside the population advantage in size and demography, various incentives and policies emplaced by the Nigerian government make it a destination of choice for investment.

Buhari also received the Secretary General of the Abu Dhabi Forum, Sheikh Al-Mahfoudh Bin Bayyah and his deputy, Pastor Bob Roberts of the US who visited him in Washington, USA.

At the meeting with the Secretary General of the forum, Buhari said  that the work of the foundation in promoting multi-faith dialogue was as important to the world as it was to Nigeria.

The president also spoke about the need to raise generations of youths devoid of religious extremism and bigotry, urging the group to continue to target the young people who are the promise of the future.

Also at an interactive session in Washington entitled, “A conversation with President Muhammadu Buhari of Nigeria”, Buhari said Nigeria’s agricultural revolution had led to the creation of over 13million direct and indirect jobs in the last seven and half-years.

He reiterated his avowed determination to ensure the conduct of free, fair and transparent national elections, whose outcome would be largely accepted by the contestants.

The Nigerian leader used the occasion to once again advise western nations not to be in a rush to eliminate the usage of fossil fuels in a bid to ensure a healthy climate.

According to him, Nigeria’s economy had registered positive growth in the last two quarters in spite of the gloomy outlook in  global economy, and the war in Ukraine.

Buhari also cautioned western nations on the frivolous issuance of travel advisories on Nigeria, urging the international media to be more objective in its reportage of the country.

He told the international community that in spite of the non- chalant actions and attitudes of some friends and allies, “Nigeria is nonetheless winning the war on terrorism.”

At the meeting with leaders of six African countries slated to have elections in 2023,  President Joe Biden of the United States praised the Nigerian leader for his efforts in deepening democracy not only in Nigeria, but also in Africa.

The meeting was held on the sidelines of the US-Africa Leaders Summit.

Biden said he had followed the trajectory of the Nigerian leader since 2015 when he was elected President from being an opposition leader at a time he (Biden) was a Vice-President.

He added that it was very heartening that “Nigeria is quite a model for democracy, especially the fact that President Buhari is not seeking a third term.”

Biden, therefore, encouraged Buhari and the Nigerian electoral umpire to continue to be totally non-partisan.

The US President said the meeting with the select African leaders including those of Democratic Republic of the Congo, Gabon, Liberia, Madagascar, and Sierra Leone was to discuss elections and democracy in Africa.

Buhari on Thursday in Washington DC, USA, warned that Africa risks not attaining the goals continental leaders have set for the region by 2063 in view of challenges facing it.

The Nigerian leader, stated this when he spoke on the topic, “Partnering on Agenda 2063: A Peaceful and Secure Africa”.

He, however, believed that the the agenda could be achieved “if there is a unity of purpose among all member states.”

Buhari said that Africa’s security and development landscape had undergone significant transformation over the past decades.

According to him, the continent has witnessed increased, diverse and complex threats including climate change and the scourge of terrorism.

Other challenges were violent extremism, transnational organised crimes, ideological radicalisation and recently, an upsurge in unconstitutional change of governments (UCGs).

NAN reports that the president concluded his official engagements with a presidential town hall meeting he held with Nigerians in the diaspora on Friday in Washington as he rounded off his participation at the US-Africa leaders’ summit.

At the meeting, Buhari commended Nigerians in the diaspora for remitting more than 20 billion dollars home in 2021.

The president also expressed pleasure at the conduct of Nigerians who had continued to excel in their chosen fields in the United States of America.

Buhari assured Nigerians residing abroad that the Nigerian government would continue to watch their backs in whichever situation they found themselves,

He expressed delight that the “ambassadors’’ were giving back to Nigeria as expected of them, urging them to do more.

Why ASUU Audit Report For Four Years Was Rejected – FG

Atinuke Adeleke : The Art of Metalsmithing