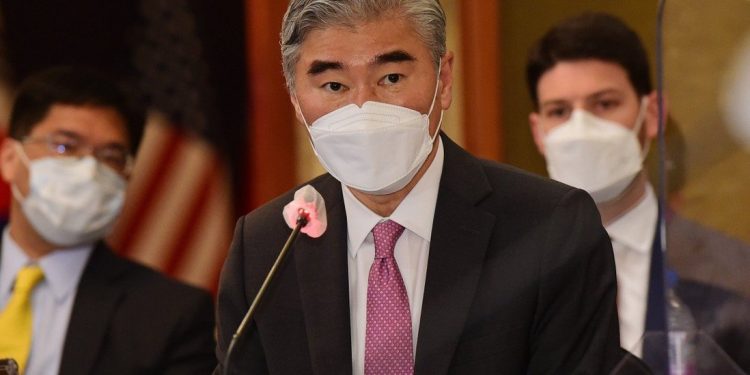 The US is adopting a new approach to nuclear-armed Pyongyang to try and bring it back to talks.

Sung Kim, the United States’s special envoy on North Korea, has offered to meet officials from Pyongyang “anywhere, anytime” amid a continued impasse in negotiations between the two.

In the meantime, the US will continue to enforce United Nations Security Council sanctions on North Korea over its nuclear weapons programme and urge other countries to do the same, Kim said on Monday.

“We continue to hope that the DPRK will respond positively to our outreach, and our offer to meet anywhere anytime without preconditions,” he said, referring to North Korea by its official name, the Democratic People’s Republic of Korea.

Kim, whose appointment was announced at last month’s summit between US president Joe Biden and his South Korean counterpart Moon Jae-in, arrived in Seoul on Saturday for a five-day visit.

The Biden administration has previously promised a “practical, calibrated approach” to North Korea, including diplomatic efforts, to persuade the country to give up its banned nuclear weapons and ballistic missile programmes.

In his first response to the Biden policy review, North Korean leader Kim Jong Un said last week that Pyongyang must prepare for both “dialogue and confrontation”.

Talks aimed at persuading Pyongyang to surrender its nuclear weapons programme have stalled since the collapse of a third summit between the North Korean leader and Biden’s predecessor, Donald Trump.

Noh said he and Kim discussed ways to cooperate and facilitate the “prompt” resumption of dialogue with North Korea. Noh and Funakoshi were also scheduled to have a bilateral meeting to discuss North Korea.

Last week, Kim Jong Un said North Korea’s food situation was “tense”, sounding the alarm in a country with a moribund agricultural sector that has long struggled to feed itself and is now under self-imposed isolation to try to protect itself against the coronavirus pandemic.

North Korea has long insisted that it has had no cases of the virus – a claim analysts doubt – but it has paid a heavy economic price for its self-imposed blockade.

Trade with China, its economic lifeline, has slowed to a trickle, while all international aid work faces tight restrictions.